Abortion: Why It’s Not Just a Social or Political Issue 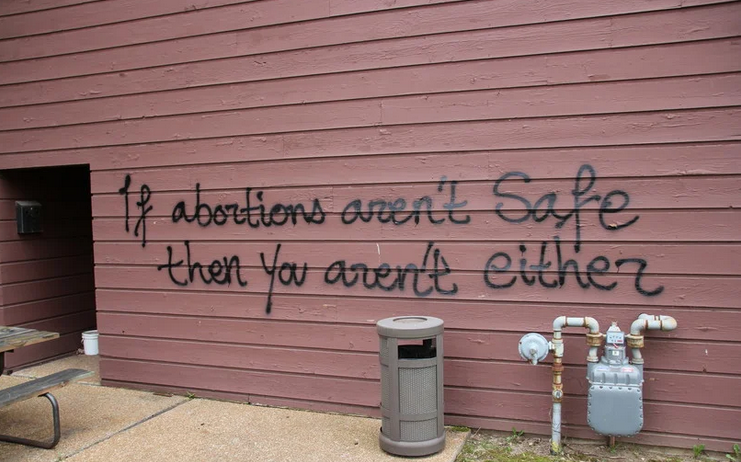 It is imperative for the Christian to always view things from a much bigger perspective – not just in terms of economic or political or cultural aspects. There is a spiritual dimension that lies behind all the crucial issues of the day. Certainly when it comes to things like the culture wars, we are foolish not to bring in the spiritual considerations.

Indeed, to ignore spiritual realities as we discuss the main controversial debates of the day would be like a painter to ignore every colour on his palette and just use black and white. If he were painting a major snow storm that might be alright, but if he were painting deciduous trees in autumn, it would be unduly limiting.

At the very least, we know that spiritual warfare is part and parcel of the battles we fight – be they political, ideological, cultural or intellectual. We will never get very far if we ignore or downplay spiritual realities. The battles over marriage and family for example are not simply cultural and social matters, but at their heart are spiritual matters.

As such, either we side with God and how he intended marriage and family to be, or we go with Satan and buy into his attempts to ruin every good thing God has created. In such a spiritual war, prayer and intercession are of course needed as much as political lobbying, writing letters to the editor, doing street protests, and voting for onside candidates.

All this may make no sense whatsoever to the non-Christian, but all Christians should understand this quite clearly. All of life is being fought over on a daily basis. It really is a battle between good and evil. And at heart it is a spiritual battle. It was C. S. Lewis who rightly said: “There is no neutral ground in the universe. Every square inch, every split second is claimed by God, and counterclaimed by Satan.”

With the above thoughts in mind, it should be clear as day that something like the abortion wars are not just fights over personal choice, autonomy, the ‘rights’ of women, and so on. Since abortion really is a life and death issue, it most certainly is a spiritual battle.

Indeed, one of the most important things that Jesus said about the devil and his hirelings fully explains just what is going on here. In John 10 Jesus contrasts himself as the good shepherd over against those who are not. And in verse 10 he says, “The thief comes only to steal and kill and destroy; I have come that they may have life, and have it to the full.”

The contrast could not be any greater. And the abortion battlefield is as close as you will get in seeing this fully fleshed out. The pro-aborts quite literally are doing their master’s bidding: to steal, kill and destroy – certainly babies at least. Pro-lifers on the other hand are here to give life and to save life. It is the difference between night and day.

The most recent and obvious example of Satan fully enraged and fully going on the warpath concerns the decision by the US Supreme Court to revisit Roe v. Wade, the 1973 abortion case. It was recently leaked that it just might be overturned. All hell broke out over that one.

Angry and fanatical pro-aborts have declared war on SCOTUS, churches and the pro-life movement. There have been plenty of death threats already, and numerous cases of vandalism and fire-bombing taking place. Satan is mad as hell, and so are his followers. As but one example, consider this recent BBC news item:

A California man is facing a charge of attempted murder after his arrest near the home of Supreme Court Justice Brett Kavanaugh. Nicholas John Roske, 26, had planned to murder a Supreme Court justice and was armed with a pistol and tactical knife, court documents said. The suspect was taken into custody at about 01:00 local time (06:00 BST). Protection for the justices has been beefed up ahead of a landmark ruling on US abortion rights.

While most of the mainstream media never reported on this, it certainly is not an isolated incident by any means. Steven Ertelt, editor of LifeNews said this:

As I write this email to you, things are getting really scary for pro-life Americans. This past week, an abortion activist was arrested near the home of Supreme Court Justice Brett Kavanaugh after threatening to murder the conservative justice. The California man cited the leak of the draft ruling to overturn Roe as his motivation for trying to kill Kavanaugh.

Meanwhile, radical abortion activists who firebombed the office of a pro-life group in Wisconsin and Oregon, and who have vandalized over a dozen churches and pregnancy centers, struck again. Police and fire departments in Buffalo, New York responded to smoke and fire at CompassCare, a pro-life medical office and pregnancy center that helps women and children. The building was firebombed and the windows in the reception room and nurses’ office were broken and fires lit.

Graffiti on the building left by the arsonists refers to the abortion terrorist group Jane’s Revenge reading, “Jane Was Here.” The group took responsibility for the other firebombings, violence and vandalism. As if that’s not enough, these violent abortion radicals are planning to blockade the Supreme Court tomorrow to literally try to prevent the justices from releasing an opinion overturning Roe.

Thankfully one American media outlet has been keeping tabs on most of this. It has just released an account of this violence and hatred. Here is how the piece begins:

The Washington Stand has found that there have been at least 41 separate incidents of violent attacks against churches, pro-life organizations, and pro-life property across the country since the May 2 leak of a draft Supreme Court decision in the Dobbs v. Jackson Women’s Health Organization case that indicated the overturning of Roe v. Wade. These attacks include arson, vandalism, property theft, and property destruction.

These incidents do not include at least nine other occurrences of physical violence against pro-life advocates, threats of violence against churches, and illegal disruptions of church services that have unfolded within the same time frame.

In the same 40-day time period, there has been a single instance of violence against pro-abortion advocacy groups, in which a woman is suspected of committing arson at an abortion facility under construction on May 25 in Wyoming.

Despite the wide disparity in violent incidents between the two groups, the U.S. Department of Homeland Security issued a “Terrorism Threat” advisory bulletin on June 7 that appeared to equate the amount of violent incidents from activists on both sides of the abortion issue. It stated, in part, “…individuals who advocate both for and against abortion have, on public forums, encouraged violence…”

The recent spike in attacks against churches and pro-life organizations is part of a wider pattern of violence that has seen a marked uptick in the last two years. The U.S. Conference of Catholic Bishops released a report in early June that catalogued “at least 139 incidents … across 35 states and the District of Columbia since May 2020” against Catholic churches and organizations, including “arson, statues beheaded, limbs cut, smashed, and painted, gravestones defaced with swastikas and anti-Catholic language and American flags next to them burned, and other destruction and vandalism.”

All this is not just a matter of differing social views. Christians and most prolifers know what a major spiritual battle this is. A number of prayer meetings and movements have already taken place, pleading for God to offer protection from the militants. Yesterday for example in the US we had this (written just prior to the event):

Stanton Public Policy Center/Purple Sash Revolution will have a candlelight prayer vigil asking for God’s protection over the Court and Justices and also for Roe v. Wade to be overturned. The prayer gathering will be on Sunday, June 12, at 7:30 pm at the Supreme Court. This prayer gathering comes after an assassination attempt of Justice Brett Kavanaugh and threatened blockade of the Supreme Court on Monday morning.

“It is deeply troubling that death threats, assassination attempts and acts of violence are being made against Supreme Court Justices and the Court itself. Violence has no place in American life and must be unequivocally and universally condemned. We are gathering tonight to pray for God’s protection over the Supreme Court and all the Justices. We will also be praying for the overturning of Roe v. Wade and an end to abortion violence which has taken the lives of 64,000,000 innocent children.”

We need to keep fighting the good fight on all levels. But above them all is the spiritual level. Spiritual warfare is crucial as we stand for the unborn. Please keep praying thanks.