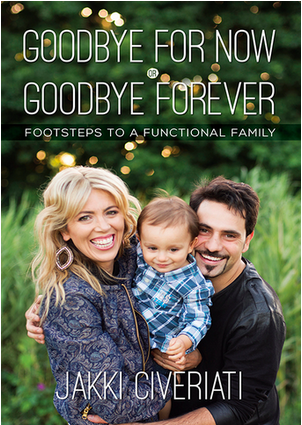 Do you long for a functional family?

It took Jakki Civeriati 26 years to overcome the cycle of emotional abuse she had lived in all her life. Jakki grew up in a family with emotionally abusive behaviours such as rage, verbal abuse, name calling, jealousy, gas lighting, and destructive criticism. At nineteen, Jakki married her first husband, a relationship that spanned sixteen years, where she was subjected to behaviours of domestic violence and emotional abuse.

Desiring to do more than just retell her story, she chose to share the many lessons that God taught her over those 26 years in her book Goodbye for Now or Goodbye Forever – Footsteps to a functional family. He had placed the tools in her hands to overcome and she saw the need to place those same tools in the hands of other women, influencing the lives of those who were suffering as she had.

When Jakki chose to leave an emotionally abusive marriage she had no children at the time, making her story much less complicated than what it is like for thousands of other women. Not every woman can just leave an abusive relationship; not every woman has a place to go, an income to survive on, family support, or even community support—they are caring for their children and their only means of survival is to stay.

Jakki’s goal was to write a book to help women who are coping with people who display emotionally abusive behaviours. These relationships aren’t bound to romantic relationships, but the abuse could come from parents, in-laws, a sibling, a boss, a friend, or even a pastor. When you either can’t leave or you have made a choice not to leave, how to do you live in these relationships without having your life and heart disintegrate under the painful behaviours you face?

As Jakki pursued Christ and served Him in her local church, God began to reveal her true identity. The countless instances of emotional abuse had become the building blocks of her soul, cementing in her the fruit of that treatment: rejection, shame, worthlessness, and the belief that she was unlovable. Jakki says, “This meant that I attracted the type of people into my life with behaviours that were familiar to me, so the cycle of abuse just continued.”

The Lord taught her first about His love and value for her—her identity in Christ. She didn’t learn this in one Bible study, it was outworked into her life through each painful situation she faced as she returned to His Word time and time again. Over the years, He laid new building blocks, digging up the old lies and beliefs and laying down His truths.

In the midst of discovering her value, the Lord allowed her to face very hard situations where she had to have a voice and stand up for herself, remembering that He was her fortress and strong tower. She also learned how to set boundaries that strengthened and prepared her for what was to come. These tools and more are presented in her book Goodbye for Now or Goodbye Forever.

So often we leave an abusive relationship, only to find ourselves in another not long after. Why? Because we don’t take the time to understand why we attract those types of people into our lives. Jakki says, “I had to heal so I could attract healthy people into my life.” A cry from her heart was that the Lord would do whatever He needed to do within her that would enable her to attract a man from a healthy, functional family. She shares the importance of going back to our family of origin and unpacking the brokenness from our childhood, allowing the Lord to change us from the inside out so that we can attract healthy people into our lives.

Goodbye for Now or Goodbye Forever is a journey of courage and overcoming, facing the abuse in your life, and learning how to manage your response to those emotionally abusive behaviours. It is a story of embracing loss and grief, finding restoration in the romance of God, and a dream being realised—a functional, loving marriage and family.

If you or someone you know feels trapped within ongoing abusive behaviours, Goodbye for Now or Goodbye Forever will help you to commence that life changing discovery of managing your response to emotionally abusive behaviour and breaking free from the cycle of emotional abuse.

Jakki Civeriati is a speaker, senior graphic designer, and a Country Music recording artist who lives in Sydney with her husband, Marco and their son. Jakki provides relationship coaching to help women who find themselves in the cycle of emotional abuse to overcome.
https://sheovercame.com.