“China Is the World’s Worst Torturer of Women”. Here is the Evidence 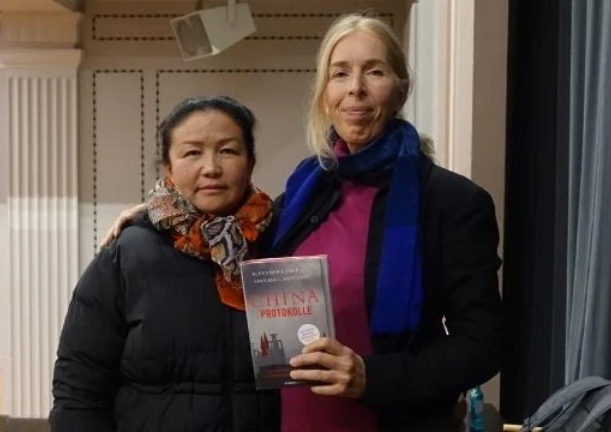 A journalist and a human rights activist, Alexandra Cavelius became internationally well-known with her book “The Chief Witness,” where she gave voice to transformation through education camps survivor from Xinjiang (that she calls East Turkestan, as its non-Han inhabitants prefer to do), Sayragul Sauytbay. A friend of Bitter Winter, Alexandra is now following up with a second book co-written with Sayragul Sauytbay, “China Protokolle, Vernichtungsstrategien der KPCh im größten Überwachungsstaat der Welt” (China Log: Annihilation Strategies of the CCP in the World’s Largest Surveillance State, Munich: Europa Verlag, 2021).

Alexandra, your biography of Sayragul Sauytbay “The Chief Witness” was very successful…

Sayragul Sauytbay was the first survivor who had the courage to speak publicly about the top-secret camp system. Meanwhile our book has been translated into lots of languages and, fortunately, there are more witnesses who dare to report. Yet the majority of the world remains silent. Although  leaked classified  documents reveal one of the worst human rights violations of our time. The proofs are overwhelming, but CCP-officials still  dismiss any reports about abuse at the camps as “lies” or “China-bashing.”

Something happened, however. In fact, more and more countries are classifying Beijing’s crimes as “genocide.”

That is a very important step towards punishing these crimes, but while others are discussing year after year, innocent humans continue to be systematically tortured with state-of-the-art technology and torture devices like those used in the Middle Ages. At the same time, the totalitarian Chinese regime promotes the largest surveillance state in the world as a very successful model for modernization, security, and prosperity to export it into other countries. Xi Jinping believes the rise of China as a world power is irreversible.

In your book, you are documenting harrowing testimonies of China’s cruel crackdown, while Sayragul Sauytbay analyzes the annihilation strategies of the CCP.

As a mother, school director, and doctor, Sayragul Sauytbay has experienced the system from different perspectives. As a former CCP official, she knows the thinking and strategies of CCP better than others. In “China Protokolle,” she analyzes different crimes such as psychological pressures, rape, the situation of children, how witnesses are harassed abroad, torture, murder, forced labour, forced abortion, forced birth control, and organ harvesting. For every crime committed by the CCP, we managed to find very important witnesses, who had fled abroad. My part was to focus on the interviews and reports of several survivors who were in the camps in East Turkestan, and add some up-to-date information to the analysis.

What did you learn by writing this book?

The extent of horror is even greater than I imagined!  As a teacher in the camp, Sauytbay was also a prisoner, but she was locked up alone in a cell and had many other special tasks to perform. This time, we looked directly into the crowded prison cells. We wanted to know what men, women, and children suffered there. What do the prisoners themselves tell us about their feelings and experiences? Each camp is different. Other witnesses in our book  experienced  the hell outside, in what is the largest open air prison in the world.

What does that mean, exactly?

Every single step of a Muslim is monitored in East Turkestan. Artificial intelligence dominates their lives. You want to visit your parents? Then you first have to ask the police for permission. You filled up your car with more fuel than usual? That is very suspicious, because maybe you are planning something evil, and should be preventively punished. Numerous innocent people are arbitrarily arrested.

At the same time, birth control is carried out by brutal means. You interviewed the Uyghur midwife Rahima Muhammad Nuri, who reports about her experiences…

In East Turkestan, only Muslim women are  forcibly sterilized. The law requires that such women, who suffer great pains and ulcers as a result of poor quality IUDs, cannot even receive medical treatment. Pregnant women are forced to have abortions in an agonizing manner—even shortly before birth. Rahima even helped a heavily pregnant woman to dig out the corps of a baby out of a grave at night in order to simulate a still birth.

What do such stories reveal about the CCP’s image of women?

Here, I would like to quote the witness Rebiya Kadeer: “The Chinese government’s respect for women is just a show (…) Especially in the occupied areas like XUAR, Tibet, and Mongolia, the CCP uses women as forced laborers, rape victims, sex slaves, victims of medical experiments… In terms of oppression of women, China is at the top of the world.”

What can we learn from all these witnesses?

The testimonies of these refugees show a totalitarian system. The reports are nightmarish. These survivors dare to report about the atrocities in East Turkestan although they are constantly threatened and their families are treated like hostages in their homeland by the CCP. Beijing’s arm is very long.  Even in democratic countries like the U.S., Sweden or the Netherlands they are living under the constant pressure of the CCP.

What does this mean for these dissidents?

Before witness Zumret Dawut for example testified in New York, the CCP threatened her by phone: “We have taken your father to prison. You’d better keep quiet.” After she made her statement, her father died. Sayragul Sauytbay, who testified in London at the Uyghur Tribunal, received in her hotel a call from the CCP: “We will deport you back to China!”  It is an unbelievable psychological terror that the CCP is exercising.

In my opinion, these witnesses are heroes. They all deserve our utmost respect. Thanks to Zumret Dawut, Rahima Muhammad Nuri, Dina Nurdybay, Tumaris Yalqun, Omar Bekali, Abduweli Ayuup, Enver Tohti, Rebiya Kadeer and the anonymous couple who have identified themselves to me and reported despite fear of death.

As an author, who has been writing about human rights violations for years, you have described many incredible cruelties in the world. What can still shake you?

What is happening in East Turkestan is an unprecedented, industrialized form of mass murder consisting of several components such as forced labour, expropriation, organ harvesting, and more. This eradication of a culture is at the same time an extremely lucrative business. Human rights lawyer David Matas expressed it in this way: “This is a form of evil the world has never seen before.” The CCP continues to do so in Tibet, Inner Mongolia, Hong Kong, in neighboring countries like Kazakhstan, and threatens Taiwan. Who is next?

Could you perhaps pick up an example from the book that particularly shocked you?

The book is filled with such stories. On the subject of organ harvesting, a former surgeon, a Uyghur, was ordered to remove the organs of a still-living prisoner for transplantation.  Chinese professor Dr. Huige Li in Germany and awarded  investigative journalist Ethan Gutmann in Great Britain confirm that this organ harvesting of prisoners flourishes today more than ever in China. In Aksu, for example, a concentration camp with  a hospital and a crematorium have been discovered. Furthermore, a so called “green passage” leading to the airport in order to transport organs as quickly as possible.

What have you learnt about the children’s situation in East Turkestan?

The witness Dina Nurdibay worked in a re-education camp for children. Girls and boys whose parents are imprisoned are locked up there. There are thousands of them. Dina reports, “In these camps, the CCP raises the people they fear the most.” These children grow up without love and respect, drilled to be party soldiers and vaccinated with hatred against their own people. “Such adolescents are so hardened that they will commit murder for a piece of chocolate. “ They have nothing more to lose.

The wife was a witness to numerous rapes in a camp in Urumqi. The husband was locked up in a huge camp, hidden deep in the mountains. The guards told them that 100,000 prisoners were locked up there. This old man had witnessed several murders in only four months. Men were tortured, beaten, and injected to death.

You write that “China’s path to world leadership is literally built over corpses.” Can you explain?

Anyone who has read “China Protokolle” will understand that it is not an exaggeration to speak of modern concentration camps in East Turkestan. Readers describe it as the “Gulag Archipelago of the 21st  century,” or as a “documentation of horror.”

Why is the world still silent in the face of the largest internment since World War II?

As the old witness in the huge camp expressed: “Nobody will hear our voices, because it’s too incredible.” It’s beyond the mind. Although these reports are deeply disturbing and hard to bear, don’t those of us leading safe and comfortable lives in our democracies have an obligation to listen and to react? The world promised after the Second World War: “Never again!” Now we must keep this promise.

“This is not just a fight between China and the US with its allies. It is a struggle between democracy and dictatorship,” is one message in your book.

The world has already painfully experienced how dangerous fascism and dictatorships are. We have a duty to listen to these witnesses to help innocent humans in East Turkestan—and to protect our own children and their future. The CCP plans to implement their ideology worldwide. That means oppression,  censorship, propaganda. It also means disappearance of critical people like the tennis player  Peng Shuai, who accused the 75-year-old former Chinese vice-premier Zhang Gaoli of sexually assaulting her.

In your book, you also present solutions for how to deal with the CCP.

There are lots of measures to save our democracy. In short it means ending up  “business as usual.” It means making decisions. You can decide to be a slave of the money of a totalitarian regime, as in the example of IOC President Thomas Bach supporting so called “genocide games” in Bejing and ignoring Peng Shuai’s accusations.

Or you can be guided by our laws and values, as in the example of Lithuania, who ignores Beijing’s censorship and is offering protection to its democratic partners such as Taiwan. Change will only be possible if other countries will follow this example—and demonstrate courage.