Don’t let fear lie to you any longer 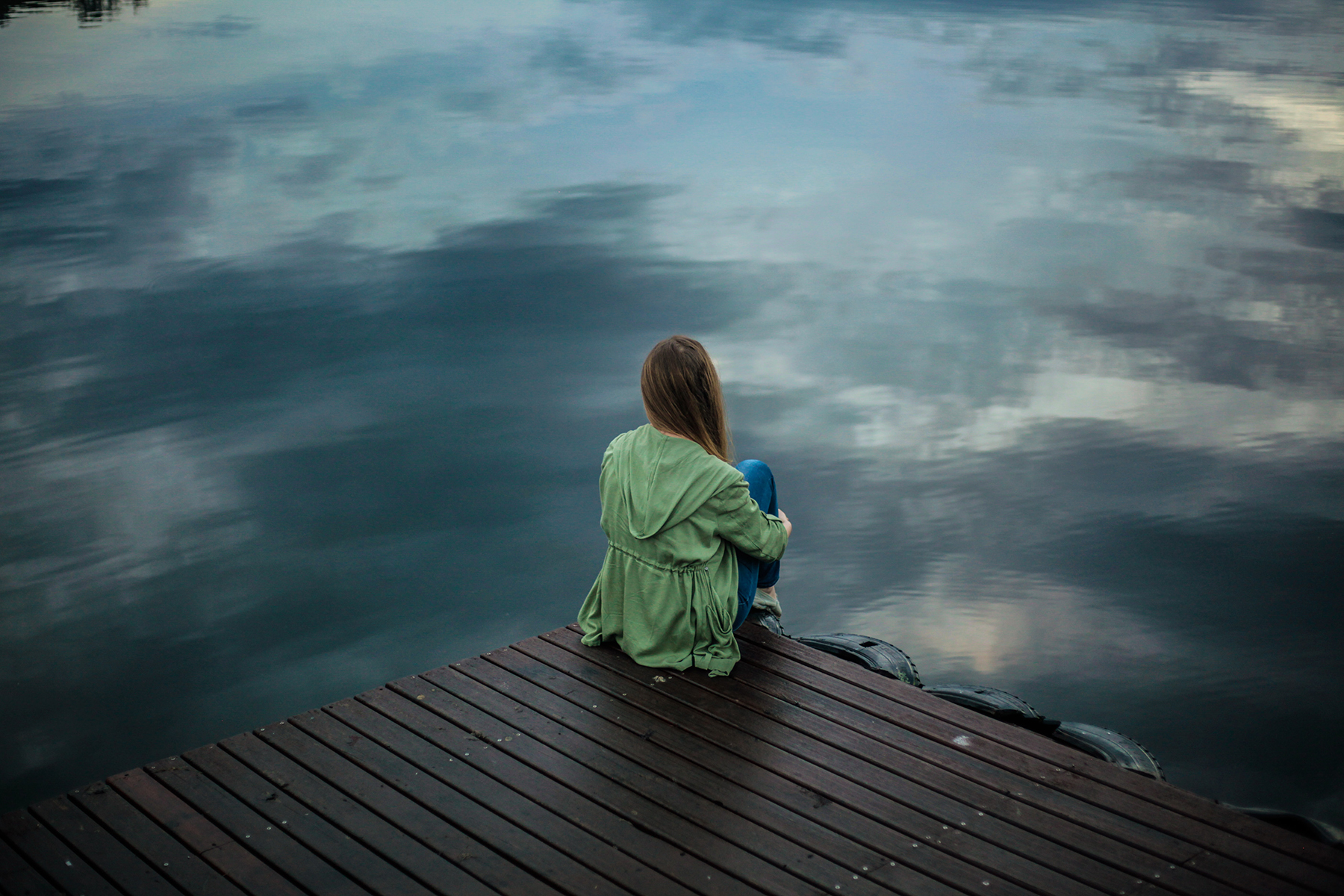 Meet Buck Rock (see below). We got acquainted last summer. We’ll never be good friends though.

See the steep stairs? I climbed those to the house on top of that rock. (I know, I know, whhhyyyy would anyone do that?) I climbed them with tears in my eyes… and on my cheeks. I was clenching my four year old’s hand on one side and clenching the rail on the other side. 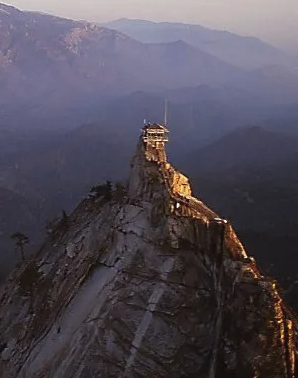 Toes tingling. Each step telling myself, “don’t look down.” Each step imagining myself, or one of my children, mis-stepping and falling to certain death. Each step reminding myself the Lord is always near.

As we make it to the pinnacle- a sigh of relief, met with another breath of anxiety. For now we are at the top! But now we are higher, now there is farther to fall.

The door to the 14×14 glass walled room where the Ranger lives (anyone else think that’s crazy?!?!) is locked. We must spend a few moments on the minuscule deck outside the living quarters (see picture). I develop an ounce of bravery and look over, but my ol’ pal Fear creeps up and taps me on the shoulder, reminding me of why this is a very bad idea and why I must back away from the ledge and sit against the wall. And so, I listen. Not only do I listen, I crouch down in fetal position, arms wrapped around bent legs, staring blankly off into the sky. I hear the faint noise of conversation the background. I try to pay attention to what is being said but the thoughts in my mind continue to drown it out.

Kids, mind you, are unafraid and have no reservations about leaning on the railing for a better look down. No sense of fear whatsoever that they are looking DOWN at the top of very tall trees! Every few seconds they are met with their mother’s stern warnings… “Don’t run! Don’t touch that! Get away from the edge!”

Eventually my ten year old son sits down beside me. We clasp hands. Tears flow down my face as I set all pride aside and whisper, “Can you please pray for me?” I’m supposed to be the one unafraid. I’m supposed to be the strong one. But ‘supposed to’ collides with reality and the aftermath is a frightened mama calling out for prayer from her boy, knowing that he will petition his God for her right then and there. He doesn’t speak a word, but rather gives a knowing look, and goes before the Throne in silence. After a pause, he stands and goes about his childish way. As for his mom? I wipe the tears from my face as to hide the fact that they had ever fallen.

Slowly but surely, I was able to stand. Believe it or not, I even took another look. It was a breathtaking view. The anxiety calmed and made way for peace. Don’t misunderstand, I wasn’t about to go leaning on the edge as if I had never been fearing for my life! But it was a relief to be able to join the kids in the awe and wonder, in the beauty of creation.

The Forest Ranger finally opened the door and we were in safely. Hmmm, perhaps a false sense of security.  After all, we were still in a 14 X 14 glass-enclosed room at the very tall height of a mountain, the morning after a big rainstorm. But at least now I am not scared of taking a wrong step. If there is an earthquake or lightning strikes, then at least it is not my fault! 😉

We sign the guest book, documenting that we were there (because for heaven’s sake, if I was doing this, I was doing it right!) asked a few questions, and said our goodbyes.

Now the time was upon us. Newton’s third law of motion… what goes up, must come down. I may or may not have considered calling for a helicopter to pick us up vs. facing those downward stairs!

“God has not given me a spirit of fear. I can do this.” Eyes fixed on each step, again clenching Kylee’s hand on one side and the rail on the other, all the while shouting at Lil Shane, “No! You may NOT throw the brand new frisbee off into the abyss!”

On the way down, my white knuckles turn back to pink. Finally at the bottom, we share a laugh and a sense of accomplishment. My tour guides (and good friends) laughed with me, quite possibly at me, as we joked about how one day I’d have a story to tell. “One morning I woke up in Hume Lake. ‘Let’s go to Buck Rock.’ they said. ‘It’ll be fun.’ They said.” Oh what an adventure that was had that day.

I had mentioned to my friends that I was afraid of heights, but they didn’t know to what degree, or how it would affect me. Truly, even I was unaware of the fear that would grip me in those 30 minutes as I am not one who is typically very fearful. “But Morgan,” you say, “why didn’t you just stay on the ground?”

Well, I think the answer is somewhat two-fold. The first reason being, part of me wanted to face my fears. “Enemy, you don’t get to win” type mentality. Metaphorically speaking, staying on the ground was safe, but I want to climb to new heights with my Jesus. I should change the lyrics of Oceans from, “take me deeper than my feet would ever wander” to “take me higher than my feet would ever wander!” And boy did He! I wasn’t safe on the ground anymore, but I was safe in His arms, which is the safest place to be.

Second reason, and far less mature in nature, was pride. There was no way I was NOT going to go. My friends (senior citizens) and three of my children (ages 4, 8, and 10) were going, and if you think for a moment that pride didn’t creep in and say, “if they can do it, so can I,” you’re mistaken 🙂 No way was I sending all of them up those stairs and watching from a position of fear and trembling. I wanted to be a part of it, and wanted to walk right by my babies the whole way.

We drove the hour back to camp and went on with our day. And here I am, alive and recounting the story for you, feeling pretty dramatic, lol. It truly was terrifying for me, but I’m so thankful for the experience. Once again, my Lord showed up and reminded me He NEVER leaves our side.

To me, this story is so symbolic of letting go and trusting the Lord- allowing Him to take us to new heights, even when it is scary. We mustn’t allow fear to dictate our lives, to dictate what we will and won’t do for Jesus. It is a reminder that when we are with Him, we are in the safest place.

My husband (Shane) has encouraged me for a while to write more, utilize social media, etc.  To an extent I’ve allowed fear (among other things) to deter me. I think, in part, it’s due to the fact that we already live in a fishbowl. Perhaps there’s a part of me that has wanted to find a proverbial rock to hide under, unexposed to the world. Maybe there was some corner of my life that could remain private… our home, our children, my half of who we are. And if it was possible, I’d take it!

But alas, we can run nowhere from the Lord when He is calling us to a task. I have tried. And failed. So, it’s time to step out into the unknown. And if that puts me in the way of all my fears, then so be it.

Here’s to (even more) fishbowl living! Would love to have you peek in and join me on the journey.