Elizabeth Tabish: I saw hypocrisy within churches, didn’t want anything to do with it 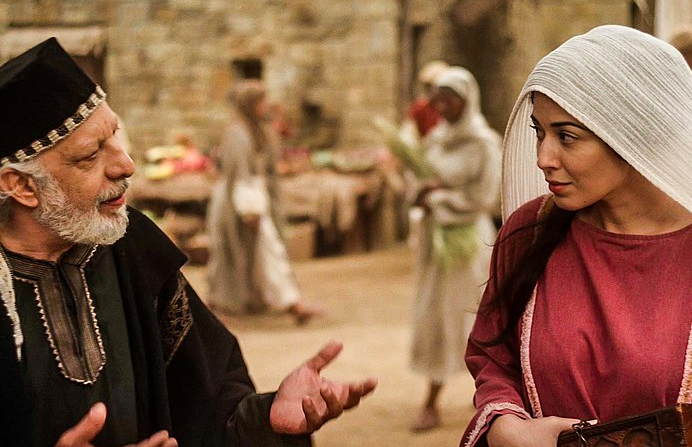 She was depressed, living with Mom, and thought about giving up on acting when she read the script for Mary Magdalene’s part on The Chosen.

“I had been depressed I think for a number of years without really admitting it,” Elizabeth Tabish told ASSIST News. “I had chronic back pain and had a hard time getting out of bed emotionally, physically, and slept way too much. And I was barely making ends meet.”

To survive financially, she did commercials, which she felt was “a mockery” of her pitiable state. “I would show up, have this happy, healthy family and kids and a dog and drive a nice car and smile all day and then come home and go back to bed. I was self-medicating, drinking a lot and couldn’t quite find purpose or meaning.

“I felt like I was just in this loop of despair. I couldn’t see a future, what it was going to be. I couldn’t envision it. I was a little lost.”

The income from commercials wouldn’t pay the rent. “I moved in with my mom, because I couldn’t pay for my apartment anymore. I thought I needed to get a big girl job, so I told my agent to stop submitting me.”

Unbeknownst to Elizabeth, her agent disregarded her instructions and submitted her for the part of Mary Magdalene. “He submitted me for this anyway. And when I read it, I connected to the character in such an intense way.  I thought if I don’t book this, it’s a sign I should not be acting.”

Following the audition, she was elated to get a call back and meet Dallas Jenkins, the creator, director and co-writer of The Chosen. “I felt like it was something that was written for me in a way that gave me a new start and a new beginning, which is literally what happens to Mary Magdalene. It’s just this fresh start.

Elizabeth has warm memories of her spiritual upbringing. “I was raised Catholic, and I loved it. But then, I think at some point, religion and personalities within religion have been distracting, in a way that I almost forgot the core of Christianity, the core of what Jesus was teaching. And I think that happens a lot to young people. And there can be this sort of cynicism that comes from that. So I kind of held on to that cynicism for a really long time into my adulthood.”

She was turned off by insincerity in the way some practiced their faith. “I saw some hypocrisy within churches and I didn’t want anything to do with it and because of that, I felt a little isolated when I did actually need a community that believed this. So even though I maintained this belief, I didn’t have a way to express it or people to communicate with about it. Other than my family so it was this isolating thing until the show.”

Because of her involvement in The Chosen, Elizabeth rediscovered the essence of a personal relationship with Jesus. “Because of the show, I’m able to return to that core, the core teachings of what Jesus was actually teaching and who Jesus actually was and not necessarily rely on the interpretation of other people for that for me, because then it becomes a personal thing, and it becomes a very alive and real thing.”

“The show has been this path back to it,” she continues. “And also, I didn’t realize how many healings and how many miracles (Jesus did). Somehow, I missed that as a kid, how expansive and incredible this belief system actually is. So, it’s connected me deeply and beautifully.”

Elizabeth was unaware that Mary Magdalene was demon-possessed before finding freedom in Christ. “I didn’t even know she was possessed, and Jesus expelled these demons from her. I had never heard that before, which is insane. And so, when I first read this script, I thought, is this biblically accurate? And it turns out, yes.

“We only have a little bit of information about her from the Gospels. But then we have all of this other speculative fiction about her in media…if she was a prostitute, or Jesus’ wife, there’s all this misinformation about her. We know that she helped finance the ministry, and then we know that she was the first to see Jesus resurrected. But I think it speaks to the writers’ imagination, but also understanding of the Bible, of what could have led up to these moments.”

The strength of The Chosen lies in making the Bible characters more personal and relatable. “They’ve done such a beautiful job of making Mary Magdalene so human. And how she would have interacted with everyone and the disciples, with a type of understanding that the others might not have since she has directly been healed by Jesus. She is just a really well written female character and I get to go into sides of her that are darker and more challenging, and also really, really human and gritty in a way that every actor would love to do. And, you know, to make her human and realistic and not a one-dimensional Bible character.”

Elizabeth was nervous about one particular episode in which Mary reverts to her past lifestyle. “I thought, do I have to go back to being depressed? I realized you have to be a method actor. Be it in order to do that you just have to relate to it and have compassion for the character instead of becoming the character.

“For that episode, I did not want to revert to previous behaviors. So, I tried to have a little bit more compassion for her. But I also realized that I just need to show up, trust the writing, trust the other actors, connect to them in the present, and just listen to them. And then just trust that God is going to help with this, instead of me trying to control it into what I think it ought to be. And that helped immensely during season two, having a little bit more faith and being able to do it in the moment.

“There’s a few things that lead up to Mary running away. These triggering elements remind her of pain in the past, and then a demonic man, coming and trying to attack her, which is maybe the biggest trigger…he calls her by Lilith. It’s a complete return to a reminder of how bad things really were.

“At that point, she isn’t thinking clearly. And she just needs a drink. Like, she just needs what she used to cope with, not knowing it is such a bad idea. Because she can’t even think past that need. I think people can relate to that feeling to have just when you’re in that place. You think nothing else can help you because you can’t see past the pain. I was relating a little bit to that. I was…I didn’t want to have to return to that side of her. I definitely had to remind myself of that side of me. And I’m really relieved this isn’t me.”

Season three has been filming since April 2022 in Midlothian, Texas, on the site of The Salvation Army’s Camp Hoblitzelle, where filmmakers spent $20 million recreating first century Capernaum, along with a massive sound stage. In June, nearly 12,000 extras from 36 countries came to film the Feeding of the 5,000. They paid their own travel expenses and made their own costumes, enduring many hours of filming in an open field, under blazing heat.