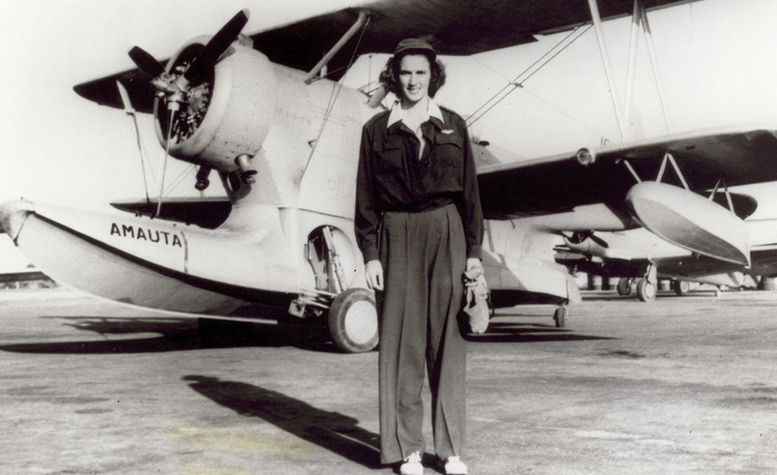 Betty Greene was a pioneer missionary pilot and a co-founder of MAF, the Mission Aviation Fellowship.

Elizabeth ‘Betty’ Greene was born in Seattle in 1920 to a Christian family who brought her and her brothers up in the Christian faith. Fascinated with flying from childhood, Betty took lessons and gained her pilot’s licence when she was just sixteen. Nevertheless, Betty’s desire to fly had to compete with a greater ambition: to serve Christ as a missionary. Unclear how she was to do that, Betty studied nursing but dropped out after two years.

Suddenly, Betty’s flying skills were in demand. America’s entry into the Second World War in 1941 caused an enormous need for trained pilots. It was ruled that while women pilots could not serve on the frontline, they could be used to free up male pilots for combat by ferrying aircraft, training pilots and even testing planes.

Betty joined the WASP (Women Airforce Service Pilots) and flew a variety of planes, from fighters to bombers, eventually working on hazardous high-altitude test flights. Betty was later to claim that, for all its challenges, her WASP training was an enormously useful preparation for her later ministry as a pilot.

During the war Betty wrote an article for a Christian magazine where, speaking of the needs of missionaries, she wrote, ‘I am eagerly awaiting the time when God will use my flying to take the glorious gospel of our blessed God to those who are without Christ.’ Her words were noted by other mission-minded fliers and, as the war ended, Betty became one of the founders of the Christian Airmen’s Missionary Fellowship.

Ironically, given the fellowship’s very masculine name, Betty was its first paid employee and pilot. CAMF soon became the Mission Aviation Fellowship, or MAF, an organisation which continues to this day (www.maf.org).

Betty was to work with MAF as a bush pilot for sixteen years, based successively in Mexico, Peru, Nigeria, Sudan and New Guinea. She flew in some of the world’s remotest areas: over bleak deserts, unmapped rainforest and treacherous mountain ranges. She flew missionaries and their families, doctors, patients, aid workers, as well as transporting vital medicine and equipment.

Betty’s flying record was astonishing. She flew regularly from twelve countries, landed in some twenty more and accumulated 4,640 hours flying time with only minor incidents. After stepping back from ‘frontline’ flying in 1962, Betty continued her involvement with MAF, working at its headquarters and being an MAF advocate until she died in 1997.

To understand the magnitude of Betty’s achievements, we need to remember the twin challenges she faced. The first was that her job was hazardous. Bush flying in the middle of the 20th century was very different to the automated and computerised aviation we are familiar with today. Betty flew single-engine aircraft without a co-pilot, navigator or autopilot and, without GPS, found her landing site by careful navigation and tracing the roads and rivers below. Radio communications were unreliable.

She took off and landed on dirt or grass strips that were short, uneven and sometimes occupied by people or grazing animals. The absence of reliable weather forecasts meant that flights often had a strong element of uncertainty. Bush flying demanded constant attention to the plane, the weather and the ground. It was heroic, and still is. Although Betty had many incidents where she believed God had miraculously delivered her, she knew many pilots who were killed. She faced the daily risks with courage, confidence and faith.

The second challenge that Betty faced was prejudice. Flying – especially bush flying – remained a man’s world. As a woman she was a phenomenon: when Betty approached a plane, it was sometimes assumed that she was a stewardess. Even in the Christian world there were still those who felt that if a woman had to have a job, it was not flying a plane. She faced particular problems in some countries. In Sudan an act of parliament was required to allow her to fly.

Although Betty seems to have shrugged off the insults of prejudice, the fact that she knew any accident or mistake would be blamed on her gender put pressure on her. Yet wherever she flew she soon won admiration from all who knew her: local officials, professional pilots or the military.

I think there are three things to think about in Betty Greene’s heroic life.

First, Betty was a humble pioneer in her vocation. She was the first woman to fly across the Andes and the first to fly into the interior of New Guinea. But being a pioneer brings its own risks. Sometimes the challenge of achieving some new ‘first’ can become more important than doing your task. Betty never worried about breaking records; she just sought to serve God.

Second, Betty managed to combine a holy passion and her vocation. There’s a widespread view that if you enjoy doing something, then God probably wants you to stop it and do something else. Betty is an example of someone who, having put God first, found that in his service she could fulfil her passion.

Finally, Betty enjoyed a holy peace in her vocation. Amid storms, equipment failures and daunting terrain, Betty flew on with quiet concentration. In her autobiography, Betty tells how her habit of seeking God at the start of every day prevented panic and gave her peace. Betty’s vocation brought other challenges. Although there seem to have been romantic possibilities, she always felt that her calling as a bush pilot meant that marriage and motherhood were not to be hers. Here, too, she had peace.

Betty Greene, called to be a pilot, lived a life in which, in every way, she flew for the Lord. May we, even if we remain earth-bound, do the same.