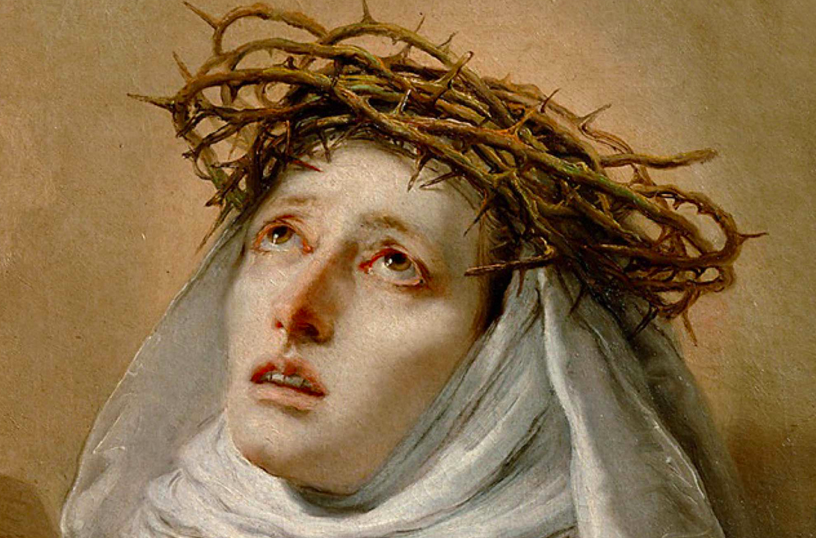 Catherine was born to a cloth dyer in Siena, Italy, in 1347, the twenty-third of twenty-six children, most of whom didn’t survive infancy. It was a tough time and place to be born: the Black Death, which was to kill a third of Europe, was spreading; much of what we now know as Italy was a mosaic of warring factions; and the Catholic church, which had brought some measure of stability to Europe, was in disarray with the Pope exiled at Avignon in France.

Catherine grew up in poverty with no formal education, only learning to read and write when she was twenty. At the age of six she had a vision of Christ in glory, and at seven vowed to devote her life to God. Although illiterate as a child she absorbed an enormous amount of biblical knowledge from what she heard at church.

Her parents pressured her to marry but she refused and announced that she would be a virgin ‘married to Christ’. She joined a group of women attached to the Dominican order but refused to retire into a convent. Instead, she stayed at home in prayer and meditation, periodically leaving to give away food and clothing to the poor.

At the age of twenty-one Catherine underwent some sort of visionary experience that she later described as a ‘mystical marriage’ to Jesus. However we understand this event, it gave her a renewed motivation for social action and she became sacrificially involved with helping the sick, the poor and the imprisoned. Her reputation in Siena soon grew and she acquired both men and women followers.

As the ever-unstable world of mediaeval Italy crumbled further, Catherine found herself working beyond Siena and involved in politics, then inextricably linked with religion. With the uneasy approval of the church authorities, Catherine began touring through Italy, boldly demanding the reform of church and the disciplining of corrupt clergy. She used her influence to try to maintain political stability and, preaching to crowds, encouraged repentance and a trust in God’s love.

From 1375 Catherine began dictating letters, first to those around her, then to political authorities and, eventually, to Pope Gregory himself. Quite unafraid of a man who could have had her burned at the stake, she rebuked him, challenging him to reform the clergy. Either impressed or daunted and ignoring the fact she was an uneducated lay woman, the Pope commissioned Catherine as ambassador of the Republic of Florence and had her brought to Avignon to try to make peace with the Papal States. There she met the Pope and challenged him to return to Rome to help the church.

In 1377 Catherine returned to Siena where she created a convent. There she dictated her only book, the visionary and passionate Dialogue of Divine Providence. She continued her work as an envoy and was sent to Florence to try to broker peace between various factions. When riots broke out, she narrowly escaped assassination. When two rival popes emerged after Gregory’s death in 1378, Catherine found herself called in to try to bring stability to the church.

Catherine’s health, however, was failing. For whatever reason, she had been eating inadequately for years and became severely malnourished. In 1380 she died at the age of thirty-three, leaving behind her Dialogue, nearly 400 letters, numerous prayers and an honoured memory. She was canonised as a saint in 1461 and in 1970 was declared a doctor of the Catholic church; one of only two women to be so honoured.

Let me offer you three things that emerge from her life.

First, Catherine sought access to heaven. Mystical experiences are always ‘someone else’s story’ and are not easy to evaluate. Nevertheless, it is evident that Catherine had a remarkable ‘inner life’ whose depth and intensity is challenging. Much modern Christianity is so preoccupied with activities that it risks a crippling spiritual shallowness. We may have a sounder theological basis than Catherine of Siena, but do we have her thirst to know and love God?

Second, Catherine sought action in this world. She saw what was wrong all about her and she wanted to do something about it. Whether working with the poor or trying to mediate peace, she courageously tackled problems and injustices. She had the courage to speak truth to power. Do we?

Finally, she sought to connect heaven with the world. While the mystic always risks retreating from the world, the activist risks neglecting heaven and its values. Catherine had an integrated faith and brought her knowledge and experience of God and his truth to bear on her broken and troubled world. Catherine was a prophet whose heavenly contemplation brought earthly action.

Let me conclude with some of Catherine’s own words:

‘Be who God meant you to be and you will set the world on fire.’
‘Proclaim the truth and do not be silent through fear.’
‘God is closer to us than water is to a fish.’
‘Start being brave about everything.’
‘Nothing great is ever achieved without much enduring.’

Catherine of Siena remains a challenging figure: a woman who, in difficult times, loved God and displayed his love for others. May we do the same in our world today.