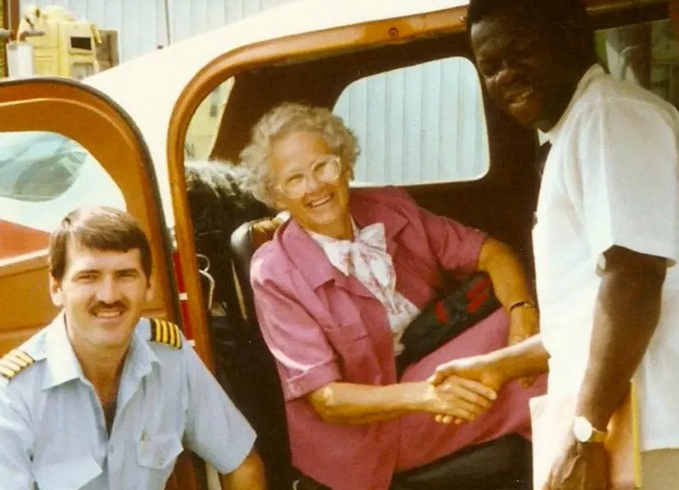 Helen Roseveare was born in 1925 in Hertfordshire, England, and went to Cambridge University to study medicine at the end of the Second World War. There she began to attend the Cambridge Inter Collegiate Christian Union, the CICCU.

Soon Helen received Christ and resolved that her medical skills would be used on the mission field and, upon qualifying, applied to the Worldwide Evangelization Crusade (WEC) to be a medical missionary. Helen was a woman endowed with intelligence, skill and determination but with a tendency to be impatient, domineering and a perfectionist.

After completing studies in missions, French, and tropical medicine, Helen was sent to the remote north-eastern corner of the Belgian Congo – now the Democratic Republic of the Congo – in 1953. There she founded a school that trained women to be both nurses and evangelists. In 1955 she took over another maternity and leprosy centre and, with the aid of local support, transformed it into a hundred-bed hospital with a training school for paramedics and many linked rural clinics.

Helen was, however, a victim of her own success and her directors in the mission struggled to deal with an independent-minded single woman who had the desire and ability to take the initiative. After deepening problems between her and her management, a discouraged Helen returned to England in 1958 to receive further medical training.

She struggled with her future and, feeling that her problems on the mission field might be avoided were she not single, prayed for a doctor husband. Her prayer went unfulfilled and Helen, now acknowledging that she had tried to manipulate God, returned to the Congo in 1960 as a single woman.

After Congo’s independence in 1960, tribal tensions ensued. With a civil war looming many missionaries left but Helen remained, believing that the God who had called her back to Congo would protect her. In 1964 the civil war erupted, resulting in five months of savage brutality during which 27 missionaries were killed, hundreds of Roman Catholic priests and nuns slaughtered, and over 200,000 African civilians murdered. Rebels took control of Helen’s mission hospital and held her captive.

For the next five months she was beaten, humiliated and raped. She was later to write how, in this terrible ordeal, she felt God’s control, purpose and love, and even a sense of privilege in suffering for the gospel. Eventually she was rescued and returned to England.

In 1966 Helen returned to Africa for a third time and set up a 250-bed hospital, with numerous care and training facilities. Yet she discovered that Congo had changed and she struggled to fit in with the new nationalistic mood. In 1973, suffering from health problems, she returned to England.

Lonely and discouraged, Helen turned to God and her prayers were answered through her acquiring a new ministry as a speaker and writer on Christian missions. She soon became known as someone who combined a deep spiritual wisdom with an engaging honesty and humility. She continued an active ministry into the new millennium, dying in 2016 at the age of 91.

There have been many extraordinary missionaries but what makes Helen Roseveare a hero of mine? Let me mention three things.

First, Helen was astonishingly faithful. From the early days of her conversion she determined that she would use her talents to spread the gospel across the world and she continued to do that over a long life. Feeling called to Africa, she hung on to that vision through rejection, humiliation and the worst kind of physical abuse. She displayed a resilient refusal to give in that we could all learn from.

Second, Helen was utterly fearless. She frequently faced fear, particularly during the civil war; she came close to death several times. Yet she threw her fears on God and he remarkably strengthened her. To return to Congo that third time after the abuse that she had suffered is a remarkable testimony to her courage. She was also courageous in how she spoke about her own struggles so openly.

Finally, Helen Roseveare was remarkably frank. When she started as a missionary there was a widespread assumption amongst the Christian public that missionaries were individuals who were immune to spiritual problems and who led lives which saw continuous triumph over difficulties. This artificial situation was one which many mission societies felt obliged to encourage in presenting their work. The result was profoundly unhelpful, with many Christians feeling that they couldn’t become missionaries because they lacked the apparently high level of saintliness that seemed required.

Helen’s honesty about herself, her struggles and problems, helped shatter many of these illusions. She showed that missionaries were, above all, ordinary people who were called to preach about an extraordinary God. Helen’s honesty was particularly helpful in one specific area. Her open, matter-of-fact declaration that she had been subjected to rape – a word rarely spoken in Christian circles – shocked some who prefer to assume that God automatically protected a missionary’s ‘purity’.

Here Helen’s words proved to be profoundly liberating for many women and men who had suffered sexual violence and had, under a burden of shame, felt obliged to stay silent. In our age, where sexual abuse is as prevalent, Helen’s writings remain profoundly helpful.

Let’s conclude with Helen’s own words:

To love the Lord my God with all my soul will involve a spiritual cost. I’ll have to give Him my heart, and let Him love through it whom and how He wills, even if this seems at times to break my heart.

To love the Lord my God with all my soul will involve a volitional and emotional cost. I’ll have to give Him my will, my rights to decide and choose, and all my relationships, for Him to guide and control, even when I cannot understand His reasoning.

To love the Lord my God with all my mind will involve an intellectual cost. I must give Him my mind, my intelligence, my reasoning powers, and trust Him to work through them, even when He may appear to act in contradiction to common sense.

To love the Lord my God with all my strength will involve a physical cost. I must give Him my body to indwell, and through which to speak, whether He chooses health or sickness, by strength or weakness, and trust Him utterly with the outcome.