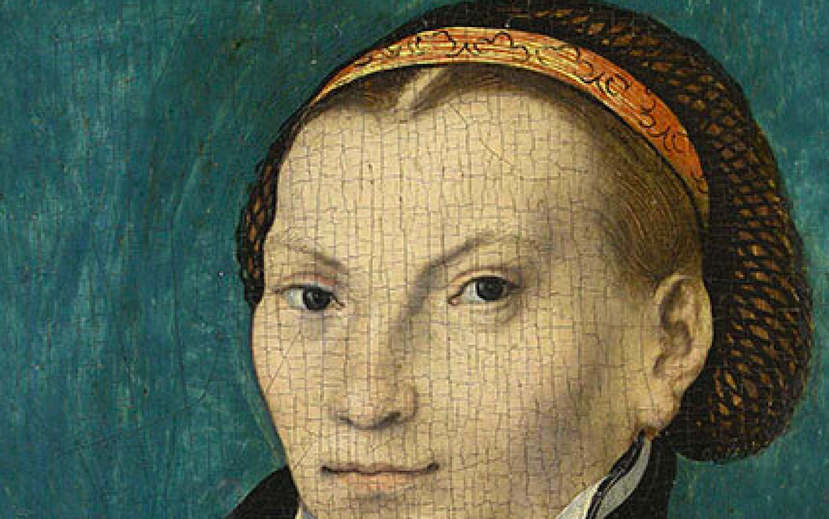 Katharina von Bora, the nun who married the former monk Martin Luther, continues to be an inspiring figure after nearly five hundred years.

Katharina was born into a family of nobility in Saxony, near Leipzig in Germany, in 1499. At the age of five she was sent away to a convent for education, with the intention that she should become a nun; a common strategy to avoid the expense of a daughter and a dowry. There, Katharina would have been educated not just in religion, but in writing, singing and practical skills such as farm management. At the age of sixteen she took her vows as a nun.

Outside her convent, the world had suddenly become turbulent. The medieval Catholic Church’s authority over society had long been challenged. The looming storm finally broke in 1517 when the monk and theology lecturer Martin Luther published The Ninety-five Thesescriticising the church. Aided by the new technology of printing, Luther’s protests spread and the Reformation began. Arguing powerfully against any need for priestly celibacy, monasteries and convents, Luther and his followers were soon encouraging monks and nuns to leave their cloisters and enter the world.

Luther’s teaching made its way into Katharina’s convent and some of the nuns wrote secretly to him. He organised their escape. In 1523 twelve nuns, including Katharina, were smuggled out of the convent in the back of an empty wagon. It was a risky action: the law made freeing or kidnapping nuns punishable by torture and death.

Luther welcomed the nuns. Aware that impoverished, single women were vulnerable, he asked their families to take them back but they refused, anxious about the legal consequences. Luther now tried to arrange for the nuns to find husbands. Within two years the only woman who had not been satisfactorily settled was Katharina, who was staying in the home of the famous painter Lucas Cranach the Elder.

Here we get the first evidence of Katharina’s independent, feisty nature. Two distinguished individuals offered themselves as potential husbands but she rejected them and announced she would only marry either one of Luther’s fellow reformers or the reformer himself. In the end Luther yielded and he and Katharina were married in 1525. She was twenty-six years old and he was forty-one.

Now, although Luther is one of the most influential men in church history, was gifted with profound theological insight and a capacity for hard work, he could also be impetuous, depressive and unpleasantly antisemitic. In short, he was no dream husband and Katharina’s achievement in making a happy marriage should not be minimised.

The newlyweds lived in a three-storey former monastery in Wittenberg. There, Katharina, Luther’s ‘Katie’, began operating the buildings as a guest house, breeding cattle and brewing what was, by every account, excellent beer. Luther, engrossed in his theological writing and teaching, happily let her run the estate. In addition to her managerial duties, Katie bore six children – two of whom died in childhood – and somehow also raised four orphans as well.

Contrary to expectations, Martin and Katie had a successful marriage. It was no love match at the start. Luther confessed to a friend, ‘I neither love my wife nor burn for her, but I esteem her.’ Yet that esteem grew to a deep love on both sides. Katie and Martin discussed theological matters together and he quipped that in this area she was ‘Doctor Katharina’. A key element in their married life were evening meals where they were joined by visiting clergy, officials or Luther’s university colleagues and had free-flowing conversation to which Katie contributed.

In addition to running a family, a guest house and an estate, Katie successfully managed a husband who, without her, would have self-destructed. Refusing to be intimidated by the man who had shaken all Europe, she nursed him, advised him and soothed his depression. Once, when Luther was bitterly low, she put on a black dress. Luther, noticing it, asked, ‘Who died?’ ‘God,’ Katie replied, ‘since you are acting as if he is dead.’ Luther recovered.

Luther died in 1546 and, sadly, Katie now found herself in financial difficulties, made worse by being forced to leave home by outbreaks of war and plague. In 1552 she fell from a cart and suffered injuries that, months later, took her life. Her last reported words were homely and touching: ‘I will stick to Christ as a burr to cloth.’

Why is Katharina von Bora a hero? Let me suggest four reasons.

First, she was a woman who was a pioneer. She had to be. Priests, monks and nuns had been unmarried for at least a thousand years and there was no precedent for a ‘priest’s wife’. Katharina was radical in her day by choosing her husband. She remains radical in our romance-obsessed day by embarking on a marriage driven by the head rather than the heart.

Second, she was a woman who was a partner. For all Luther’s flaws, Katharina stood alongside him but also stood up to him. She pastored her husband, challenged him and even rebuked him. Yet they worked together, struggled for the gospel together and indeed suffered insults together. Although Martin and Katharina had very different roles, theirs was a mutually supportive marriage in which both played their part.

Third, she was a woman of personality. It is no accident that history speaks of Katharina von Bora rather than Katharina Luther. She refused to be overwhelmed by her spouse and Katharina’s robust, spirited personality echoes down the ages.

Finally, Katharina von Bora was a woman who set a precedent. With her combination of independence and support for her husband she became the ‘model spouse’ for Christians for centuries. We have a lot to thank her for!