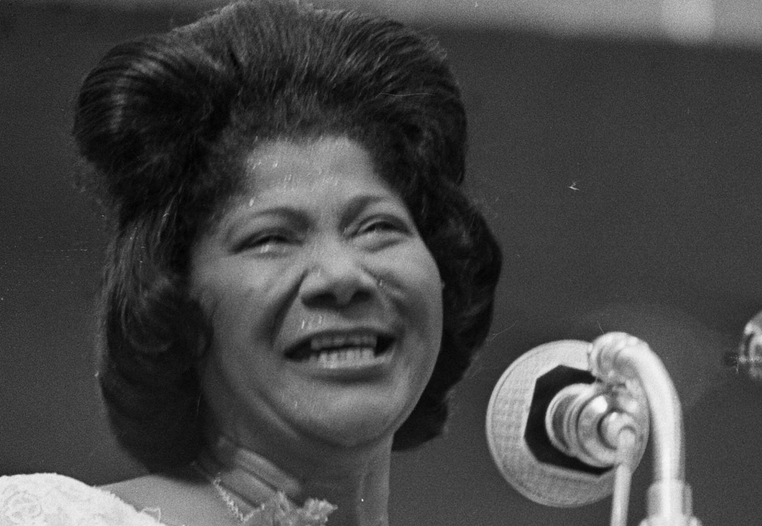 Mahalia Jackson was born in 1911 to poor, unmarried parents in New Orleans. The bitter memory of slavery still lingered amongst African-Americans: all Mahalia’s grandparents had been born slaves. Although brought up in a church where traditional hymns were sung with formality, Mahalia was also introduced to the heart-warming spirituals and the joyful music of the new Pentecostal churches.

After a very limited education and menial jobs, Mahalia moved to Chicago during the Great Depression. Recognised as an outstanding singer from childhood, she now began to sing as an increasingly acclaimed soloist. Nevertheless, with her traditional ‘Deep South’ language and music she found herself scorned by many in the increasingly prosperous black community of Chicago who felt that it was time to develop more ‘cultivated’ music and words. And churches felt she had too much enthusiasm, energy and rhythmic movement for many churchgoers.

Running a beauty salon during the week, Mahalia began to sing professionally at weekends. She began to sing in secular theatres and bars, with jazz or blues bands, but she made the decision – sacrificial at the time – that she would only sing gospel and only where God’s music was appropriate and appreciated.

In the 1930s Mahalia began singing widely across the northern USA but her listeners remained within the black community. She began making records with Decca but came under pressure from both the record company and her husband to record secular music and appear in clubs and theatres. Again, she refused, a decision that ended her contract with Decca and contributed to the break-up of her marriage.

Mahalia had, by now, developed her own individual style. Naturally gifted, she would take a song and, throwing her heart and soul into it, improvise on it with her majestic, wide-ranging voice. She would spontaneously – and unpredictably – switch between a soft or loud tone and even shout or chant as words and phrases were stretched and repeated. It has been said that in her singing, accompanied as it was with emotive gestures and movements, Mahalia imitated the mannerisms of African-American preachers. In fact, for Mahalia, who believed that God spoke through her when she sang, her singing was preaching. Her powerful voice and stage presence often had an extraordinary impact on audiences and many of her concerts ended with tears and prayers.

Mahalia continued singing throughout the war years and found a new company to record her, but she remained largely unknown outside her African-American community. After the war, however, she was ‘discovered’ by white Americans and soon began to be a national figure. Her record sales soared but, again pressured to broaden her repertoire into ballads and classical songs, she continued to stand firm.

Throughout the 1950s Mahalia became a considerable celebrity. She had her own television show – a first amongst African-Americans – and was a popular singer at concerts and church conventions. She sang at the White House and Carnegie Hall. Soon internationally known, she had a sell-out tour of Europe.

For all her success and acceptance, Mahalia never forgot the continuing problems that black people faced and refused to attend venues where segregation persisted. She became a great friend of Martin Luther King in 1956 and sang in his support at rallies. Now wealthy, Mahalia used her money to support the education of disadvantaged black people.

In the 1960s, with her fame now global, her health began to trouble her. She married again but her husband proved unfaithful and that marriage broke up. She maintained her commitment to gospel music as a medium of Christian communication and saw the rise of secular offshoots of gospel music, such as rhythm and blues and soul, with disapproval.

Mahalia died in 1972. She had sold 22 million records in her career and had become ‘the most influential black woman in the United States’.

Mahalia Jackson had a stunning vocal ability and a sheer intensity to her singing. But there is more to Mahalia than her voice. Let me draw your attention to three virtues that make her a hero for me.

First, Mahalia was a woman of fidelity. Throughout her career she saw her singing as an expression of her own faith; she kept the ‘gospel’ in gospel music and stayed a preacher in song. She guarded her witness wisely by drawing lines around what and where she performed. She sang, she said, for one reason only: to ‘make a joyful noise unto the Lord’.

Second, Mahalia was a woman of integrity. Although Mahalia moved out of poverty and the ‘Deep South’ to mix with the famous, educated and the wealthy, she never pretended to be anything other than she was: an African-American woman from the poorest background. She was never ashamed of her past. There was, too, an uncompromising integrity to what she sang. One of the risks of being a performer is of pretence taking over. It never did with Mahalia: her songs were always from her heart.

Finally, Mahalia was a woman of liberty. There was a sturdy independence to Mahalia’s life and art. Throughout her life she faced pressures to become something that she wasn’t. She refused to yield and would sing a song exactly how she or, as she would have said, the Lord told her. Her grandparents had been in physical slavery; she would not yield to artistic slavery. She lived out that great paradox of the Christian life that only in accepting Christ’s lordship do we find freedom.

Mahalia said, ‘I sing God’s music because it makes me feel free. It gives me hope.’ I’ll say amen to that!