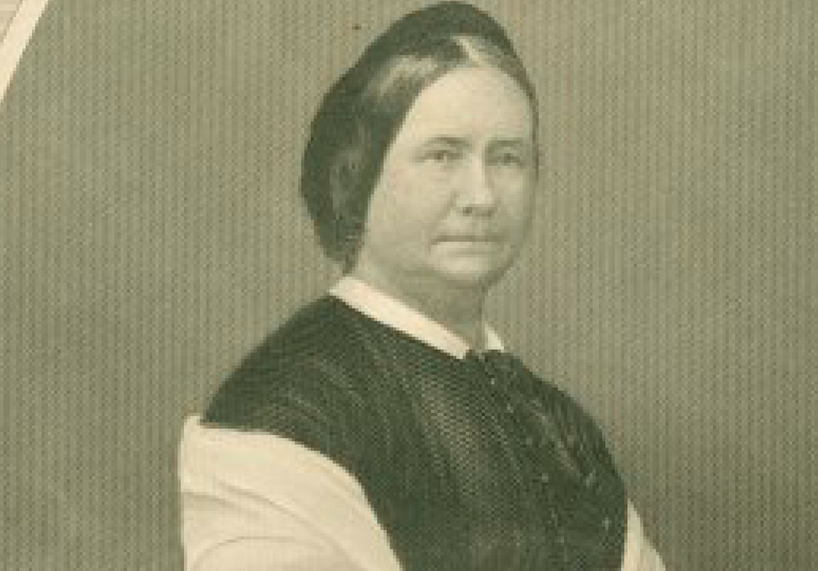 Phoebe Palmer was one of the foremost Christian leaders of the 19th century and someone whose influence continues to the present day.

Born in New York in 1807, Phoebe Worrall grew up in a family with a passionate Christian faith. Her father was a ‘first generation’ Methodist, having come to Christ under John Wesley himself in England; the great evangelist’s beliefs were to dominate Phoebe’s life.

In 1827 Phoebe married a doctor, Walter Palmer, who was another keen Methodist. The first ten years of her marriage proved sadly traumatic as she lost three of her four children, including one in a horrific fire. After struggling over these bitter events, Phoebe allowed them to draw her closer to God.

Phoebe’s sister began weekly prayer meetings which focused on ‘holiness’. In this quest for holiness, believers sought to experience ‘sanctification that would allow a holier Christian life. Phoebe decided that it required completely and unconditionally offering yourself to God and, in 1837, declared she had found that which she sought – what later Pentecostals and others would call a ‘baptism’ or a ‘filling’ of the Holy Spirit.

Phoebe now became an enthusiastic exponent of ‘holiness’, first in these home groups and then at meetings. Her ministry grew, and against considerable opposition she found herself teaching groups with men, including church leaders. With meetings sometimes numbering thousands, her reputation spread into Canada – where she saw something of a revival – to the UK, where she and her husband spent four years. Phoebe’s impact was helped by her ten books and numerous journal articles.

Phoebe had four decades of ministry and during that time her emphasis changed. Like many who have tried to climb the mountain of spiritual holiness, she seems eventually to have recognised that the summit was not fully attainable in this life. Nevertheless, she continuously exhorted Christians to seek a deeper and holier life.

Phoebe, who died in 1874, saw 25,000 Americans brought to faith in Christ during her long and fruitful ministry. Her influence went beyond conversions and Phoebe has been considered to be one of those individuals humanly responsible for the cluster of Christian events and initiatives called America’s Third ‘Great Awakening’.

Significantly, Phoebe was not just a woman of words but also one of deeds. With her extraordinary energy she encouraged and aided churches in providing food, clothing and shelter for the poor in New York. She helped an enormous range of people: widows, orphans, prisoners, prostitutes and, after the Civil War, freed slaves. She was a supporter of the planting of new churches and missionary activity, leading support for the first Methodist mission to China.

Phoebe Palmer was profoundly influential on the way many people, both in Methodism and beyond, thought about the Christian life. She is seen as someone who links the 18th-century ‘revival preaching’ associated with John Wesley, with the 20th-century Pentecostalism that began at Azusa Street in 1905.

Phoebe Palmer was a remarkable woman and Christian. Let me suggest four reasons why.

First, Phoebe was a woman who sought a deeper experience of God. Beyond all the confusing language of ‘second blessing’ and ‘sanctification’ lies the glorious and essential goal of knowing God better. She sought holiness, a word that, despite its importance in the Bible, is sadly very much out of fashion today and whose absence in our lives deprives us and our churches of God’s power.

Second, Phoebe was a woman who was empowered by God. Although she had her own natural gifts, in all the many and varied things she did, Phoebe relied utterly on God and his Spirit. She sought to let God work through her.

Third, Phoebe was a woman of exhortation about God. If personal holiness is an overlooked goal today, then exhortation – the emphatic, powerful urging of people to action – is an overlooked means to that goal. Again, it’s our loss: the idea of encouraging, challenging and appealing to believers to live deeper and holier lives is written on every page of the New Testament letters.

Finally, Phoebe Palmer was a woman who believed in the expression of her relationship with God. She believed and taught that what you took in from God in heaven you should give out to men and women on earth. Whether in practical works such as charity or service, or in preaching and teaching, the deeper Christian life for her was not something to be enjoyed selfishly but was to be shared with others.

Throughout Christian history, from the martyrs and monastics to the Puritans and Pietists, movements have arisen in pursuit of a deeper devotion and Christlikeness. So it was in 1837, following a personal tragedy and a transforming experience of ‘consecration’ and ‘sanctification’, Phoebe Palmer stepped out from her comfortable New York home to do whatever the Lord demanded of her.

May we, too, consecrate ourselves to Christ our Saviour and do whatever our Lord demands of us.