Some of my heroes are known for a lifetime of activity but some, like Rosa Parks, the woman whose quiet protest ended racial segregation in the United States, are known for what they did in a moment.

Rosa was born in Alabama in 1913 into an African-American community. When her parents separated she moved with her mother to a farm just outside the state capital, Montgomery. Although slavery had been abolished fifty years earlier, African-Americans suffered prejudice, abuse and intimidation, and were frequently subject to segregation. 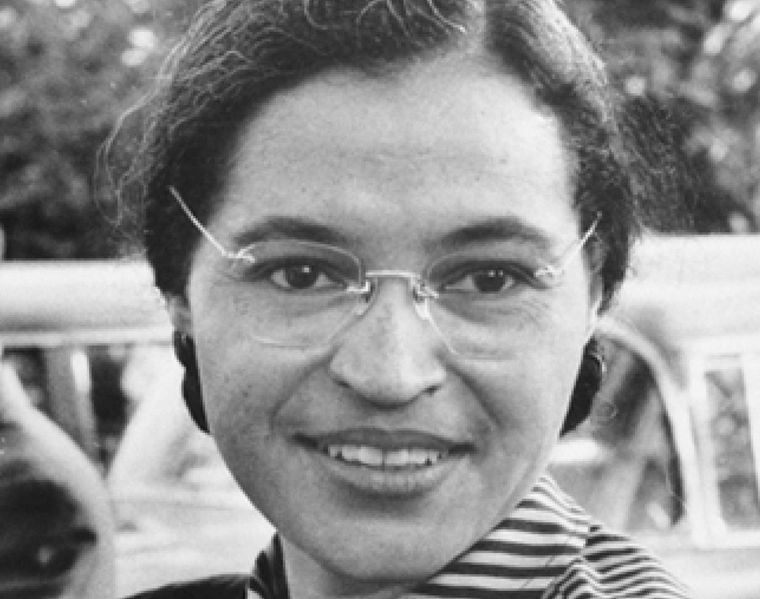 In 1932 Rosa married Raymond Parks. He was active in the National Association for the Advancement of Colored People (NAACP), which defended the rights of African-Americans. In 1943 Rosa became active in the Civil Rights Movement where she worked as a secretary. As a priority was providing legal help to those who had been deprived of justice, every day Rosa faced the appalling social inequality and frequent violence that black men and women encountered.

One focus of injustice centred on the buses. The city of Montgomery had a law that allowed the segregation of passengers by race and bus drivers commonly demanded that black passengers give up their seats when the ‘whites only’ seating was full.

On the evening of 1st December 1955 Rosa took the bus home and sat in an empty seat at the front of the section reserved for blacks. As the ‘whites only’ section became full, the bus driver moved the ‘colored’ sign behind Rosa and three other people, and ordered them to give up their seats. Three of them did but Rosa remained seated. When asked, ‘Why don’t you stand up?’ she simply responded, ‘I don’t think I should have to stand up.’ The driver said, ‘Well, if you don’t stand up, I’m going to have to call the police and have you arrested.’ When writing about this moment later Rosa said, ‘I instantly felt God give me the strength to endure whatever would happen next. God’s peace flooded my soul, and my fear melted away.’ Her response was calm and dignified: ‘You may do that.’

The police were called and Rosa was arrested and charged under the segregation law, found guilty and fined. However, by now support for her was gathering. The various organisations promoting African-American rights soon realised that this quiet, reputable forty-two-year-old woman was a suitable candidate to challenge the law. Courageously, she appealed against her conviction, challenging the very legality of racial segregation. She was backed by civil rights groups, churches and a financially damaging boycott of buses. Rosa’s case went all the way to the United States Supreme Court where segregation was ruled unconstitutional.

Rosa found, as is so often the case, that victory came with a price. Both she and her husband lost their jobs and she became the subject of harassment and death threats. Despite becoming an honoured symbol of black dignity and strength, Rosa and her husband suffered financially. Raymond died in 1977 and Rosa died in 2005 at the age of ninety-two. In a remarkable final honour, the American government had her body lie in state in the U.S. Capitol.

You could say that Rosa became an ‘accidental hero’ but there is more than that. Rosa’s action was not simply a random angry protest; there had been plenty of those and they achieved very little. This was where the right person did the right action in the right way at the right time.

There were three significant things in what Rosa Parks did.

First, there was a godly preparation. How any of us react in the spur of the moment is based on who we have become during our lifetime. In a sense, Rosa had been preparing for this confrontation all her life. Her personality and identity had been shaped by decades of Christian preaching, Bible study and prayer. The motto of the Boy Scouts is ‘be prepared’, guidance that could be applied to all of life. After all, none of us know when we are suddenly going to find ourselves in a crisis, faced with a difficult challenge to do what is right. Let’s prepare ourselves in advance. Stay close to Christ and his word, let the Spirit mould who you are and you will be ready for whatever life throws against you.

Second, there was a godly exasperation. Exasperation may seem an unlikely Christian virtue, but it is one. The fact is it’s easy to become desensitised to injustice; to accept evil with a weary shrug of the shoulders: ‘It’s one of those things’ or ‘I guess we just have to accept it’. Rosa, filled with a sense of biblical justice, decided on that bus that she was no longer prepared to accept injustice. Enough was enough! Similarly today, I believe that we all face evils in the world which we far too easily just take for granted. I think the church could do with a lot more godly exasperation.

Finally, there was a godly action. Rosa did something. (More precisely, she refused to do something – her action was inaction.) So many of us mutter our concerns, perhaps pray about them and maybe make a comment on social media, but we don’t actually do anything. Rosa, doubtlessly aware of the consequences for her, chose to act. But notice howshe acted. The ultimate success of her protest relied on how she reacted in the right way: with gentleness, politeness and courage.

Rosa Parks spoke out for her rights by speaking quietly and stood up for what was right by sitting down. May we also have the courage to stand for truth today.