From heartache to joy: our baby miracle

I barely know where to begin, as I share my journey of grief and loss, yet at the same time His absolute goodness and grace. I feel like I’ve “known” God my entire life. Growing up in a Christian home He was always present. At mealtimes, on Sundays and evening prayers. I gave my life to Him at a young age, served Him and loved Him. In retrospect though, I’m unsure if I really knew Him as father. And to this day, I feel some of the challenges He’s allowed me to face have in some way, been Him trying to lead me to that realization.

After some interesting years away from God as a young person, I was abused, did drugs and felt utterly lost. But slowly, I began to stop running from Him and started walking towards Him. During this time of getting my life back on track I met my now, husband, Simon. I remember feeling blessed beyond what I deserved to have a great family, a partner who loved God and loved me and a church family that absolutely accepted me, flaws and all. 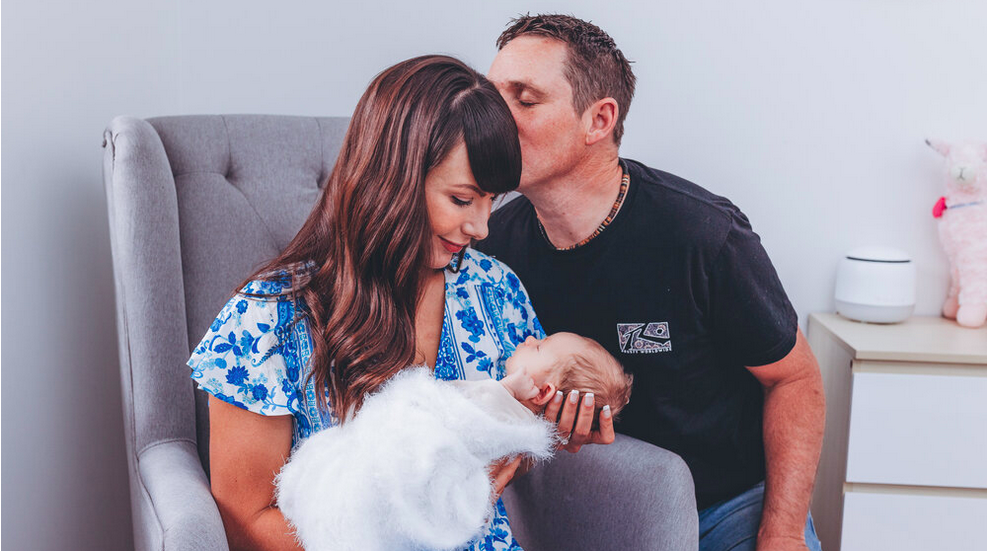 Within two months of us meeting I got news that my mum was diagnosed with bowel cancer. As a 21-year-old, I struggled to actually comprehend what this meant and the finality that possibly faced us. I was so adamant my mum would be fine. She and my dad had divorced when I was very young, and she had been remarried twice since.

I felt my whole life had been full of inconsistencies and people leaving, yet she promised me she would never leave me so God surely would heal her. Right? Not quite.

I watched my mum slowly and painfully deteriorate before my eyes over 7 long months. I nursed her until the end and held her hand as she slipped into eternity. To this day, I can barely bring MYSELF to think about her that way.

I didn’t understand it. Why would God not come through? I had shared with my unsaved friends He would heal her and trusted Him to do it. I felt like I had done all the ‘right things’ but no, she was gone. Ripped away in the blink of an eye.

She passed just 5 months before our wedding and two days before our engagement party. Simon (my husband) was my rock the entire time.

Our wedding came, it was perfect. Even without mum the day was magical and I felt so blessed again to be where I was and really felt God had brought so much healing to my soul during that time. He had even blessed me with a loving new family with my new in-laws. Plus, my dad had been amazing since mum passed. In fact, I was closer to my him than I had ever been before.

Two weeks after our wedding, after eating breakfast in bed on my wedding day with my dad, having him hold my hand in the car ride to the ceremony, dancing the night away together.

My dad had a heartache and died.

I could barely comprehend it. Have you ever felt like you’d been punched so hard you couldn’t even catch you breath? Times that by one hundred.

For 3 days we were told he “may” wake up. I prayed and told doctors, my God will come through for me. Surely not both my mum and dad? But, sadly, he was gone, too.

I didn’t understand it and I didn’t know why.

Just as he had done several months earlier, my husband Simon held my hand as I wept and sobbed, picking up the broken pieces of my heart. The back-to-back loss shook me. I lost so much weight and developed a massive eating disorder.

I felt so alone. Where was God in all of this? He felt so far, completely out of reach.

I refused to see anything was wrong and my eating disorder became a way of dealing with my grief. It got worse over time and my body started to shut down. No period, insomnia, losing my hair, you name it. But, I insisted I was fine.

This went on for 3 years until finally I sought help. Long story short, I got the help I needed and it led me to getting educated, qualified and becoming a coach myself. So I could help other women that found themselves in similar positions.

I never wavered from church during this time. I went to alter calls, connect and prayed, but deep down I still felt like God had “failed me”. In my head I knew He hadn’t, but the pain was so real and I didn’t know what to do with it.

When I turned 27, Simon and I started to talk about kids. But with no period post eating disorder, how on earth would that happen?

Again, I prayed and prayed and asked God for a miracle, but nothing. My heart was in pieces. Would we ever see the breakthrough we so desperately believed for?

I felt I had overcome all eating disorders and body image issues, but IVF scared the heck out of me. What if I get fat from all the hormones? Eek something I can’t control, I didn’t want to do it! Finally, we started the journey of IVF despite my internal fears. It was hard. At first, my body didn’t respond to the hormones, we had to go to great lengths to achieve what should have been relatively easy process.

One round, two rounds, three rounds; failed. Every single one. I almost couldn’t take it anymore.

Again, I cried out to God. Where are you Lord? I know you love me, I just need some evidence of that in my life. One day I broke. I came before Him and was empty. I finally realised I had always based His love for me on Him doing what I wanted. But all He wanted was my heart, my praise, my trust in the hurt, the pain, the heartache.

It was a turning point for me, and I was humbled in my brokenness. I felt a closeness to God that I hadn’t experienced in years. A small part of my felt I felt like maybe we weren’t meant to have a family this way. Maybe God wanted me to count the blessings He’d already given to me and live for Him regardless? I won’t say I did this perfectly, but man, I tried.

Simon and I started to talk about life without a child and came to accept it and give thanks for all we already had.

We had two embryos left. According to the doctors both were poor quality and they told us not to use them. One day while praying I felt to go ahead and do one last round, even though I desperately didn’t want to. We did it, it was the hardest round to date, and we put both embryos in despite being told they were not useable.

I remember the two week wait. Every day I would walk burns beach and pray. I felt to not do a test and just be still. The day to test came. And you wouldn’t believe it but the words I had waited to hear “Jess, you’re pregnant” finally came over the phone. I remember I sat and worshipped on the couch and felt so overwhelmed with joy. Telling Simon was definitely one of the highlights of my life.

Six weeks in, I walked burns beach praying once again. I heard God ask, “What would you do if something happened to the baby? Would you praise anyway?”

I brushed it off a little to be honest, thinking to myself, “Yes, of course I would, I trust you God.” But, also holding this thought in the back of my mind, “Surely that wouldn’t happen right?” Surely that wouldn’t happen right. I drove to a cafe to do some work and suddenly got terrible cramps. I ran to the toilet and was covered in blood, just like so many other losses

My mind started telling me lies, “See God doesn’t love you. ,ore loss, more grief. He’s let you down again.” I was so tempted to call my husband and cry and scream about another loss. But, I remembered what God had asked me that morning. Even though I didn’t want to, I praised Him anyway. I got in the car and sung my heart out.

We went to the hospital for tests, and I felt shaken, but calm. A little while later we returned home. When the phone rung, I expected them to confirm we had lost our baby, but to our utter shock the doctor on the other end said, “Jess we aren’t sure what happened or caused the bleed, but your baby is perfectly fine”. Absolute relief swept over me! I just sat in awe of the faithfulness of God. And although, the situation wasn’t His doing, He had used it to reveal His goodness and deepen the trust I had for Him, even when things didn’t make sense. A lesson I can now model to my daughter as she grows.

Our beautiful daughter was a fighter, a miracle in the making. She wasn’t lost and God never left.

Our baby girl is now 6 months old and she’s a daily reminder of God’s ultimate goodness and grace.

Has life been tough? Absolutely. But, has God always been faithful? No doubt.

Even in the pain, even in the grief He’s been present. After came years of running, mistakes, hurts and trials He has shown Himself true.

I sit here a woman abundantly blessed with more than she deserves and oh, so grateful. Grateful for the highs and the lows, the trials and the tears, even the losses because they all lead me to know my Father more truly and freely. I still fall short daily, I still have so much more to learn, but I know that whatever lies ahead He has it, He has us. just as a Father promises to do.

Jess Hull is a 32 year-old wife and mum living in beautiful Perth, WA. This article first appeared on www.sabrinapeters.com. Sabrina Peters is a Christian writer, an avid Sex & Relationships blogger and part of the team at Kingdomcity. She is married to Ben and mother to Liberty & Lincoln.