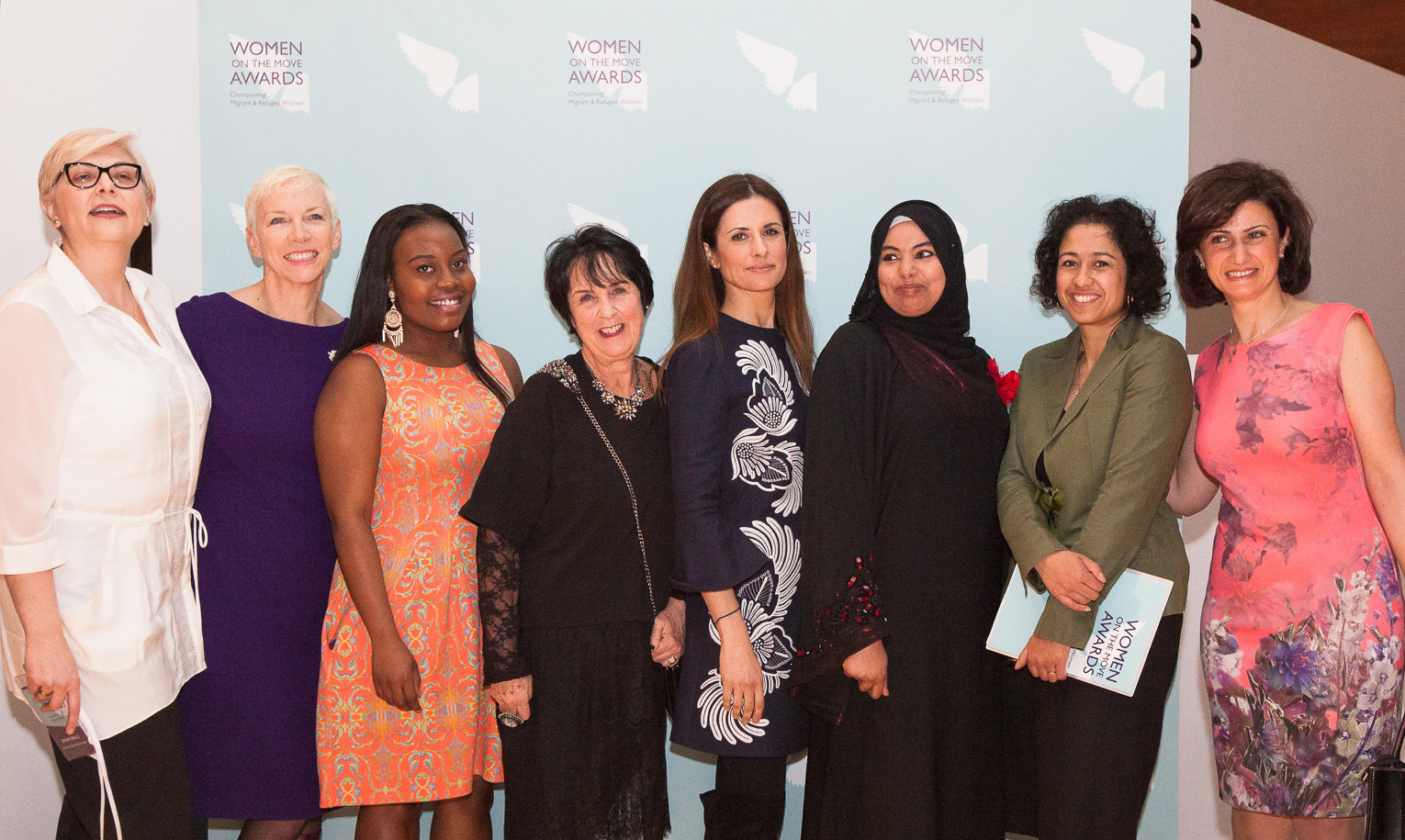 A group of courageous inspirational migrant and refugee women, now living in the UK, recently took centre stage at the Royal Festival Hall in London, during the 2016 Awards Ceremony for a group called Women on the Move.

The fifth annual Women on the Move awards ceremony celebrated the inspirational contributions made by migrant and refugee women to UK society.

The under-reported triumphs of migrant and refugee women are more important now than ever, like the story of women like Mariam Ibrahim Yusuf, a refugee from Somalia who is supporting refugee women and others in need in the north of England city of Manchester.

Or Seada Fekadu, who arrived in the UK, alone, as a refugee when she was only 16 years old, and who is supporting other young refugees seeking sanctuary in the UK on their own.

This inspirational event, which I recent attended, was part of the Southbank Centre’s Women of the World Festival-2016.

The awards were presented by Samira Ahmed, with Livia Firth, Phyllida Lloyd, Zahera Harb and Lindsey Hilsum, and were held on March 11, 2016, at the prestigious Royal Festival Hall located on London’s Southbank, and overlooking the River Thames.

Music was provided by the Women Asylum Seekers Together (WAST) choir from Manchester — winners of the 2015 Liberty Human Rights Arts Award. This remarkable choir brought together women refugees and asylum seekers in song to raise awareness of the injustices suffered by women who are seeking asylum in the UK.

Somalia-born Mariam Ibrahim Yusuf was awarded The Women of the Year Award, and certainly deserved this honor. Mariam arrived in the UK in 2008, fleeing war and gender-based violence in Somalia and leaving behind her two children, convinced that they would soon join her. But eight years later, having been detained, destitute and homeless, Mariam is still stuck in the British asylum system.

“Wanting something positive to come out of her experience, Mariam has dedicated her time to campaigning to ensure that asylum-seekers are not forced into similar hardships,” explained a spokesperson for Women on the Move. “A tireless champion for the rights of women who have experienced domestic violence and female genital mutilation (FGM), Mariam is a source of support and hope for many people who are seeking protection and trying to rebuild their lives. She is not giving up hope of seeing her children again.”

Mariam this year brought her choir to the award ceremony a choir made up of women from all different nations, singing songs that proclaimed the fact that they were in the UK not to take its benefits, but because they needed to be free from war, and all the atrocities that goes with it, particularly to women.

The Young Women of the Year award then went to 21 year-old Seada Fekadu who, at the age of 16 fled Eritrea and found her way to the UK, via Calais, on the back of the truck, on her own. Without knowing a word of English, she managed to find her way to safety in London, and as soon as she was able to do so, she started helping other young people with similar experiences.

“In addition to mentoring other young people, Seada is working to ensure their voices are heard in places where decisions are made about their lives. She was quickly granted refugee status and soon started volunteering, becoming a mentor and a role model to many young people,” said the spokesperson for Women on the Move.

“Seada is a powerful advocate for many of those who often do not have a voice and who, like she once was, are children seeking protection and trying to start a new life on their own. She is about to go to university to fulfil her dream of giving back to Britain by becoming a doctor.”

The Awards also recognized Citizens UK as Champion of the Year. This group has coordinated the Refugees Welcome movement in 85 towns and cities across the country and successfully campaigned to increase the number of Syrian refugees resettled in the UK in 2015.

Citizens UK is the largest broad-based community organizing alliance in the UK. Its membership comprises over 300 civil society groups, including schools, faith institutions, trade union branches and universities. The main aim of Citizens UK is to increase participation of civil society in public life, by organizing communities to act together for the common good.

They have also been campaigning on refugee and migrant issues for over a decade, but have really stepped up their efforts in promoting rights of refugees and migrants in the past year. The main aim of their campaign is to restore dignity and respect of migrants and refugees.

The ceremony also celebrated outstanding media coverage of the protection needs of refugee and migrant women. This year, in memory of Sue Lloyd-Roberts, the Media Award was renamed The Sue-Lloyd Roberts Media Award.

Sue Lloyd-Roberts was a pioneering journalist, who worked for ITN before joining the BBC, reporting as she did on issues including human rights abuses around the world. She was appointed MBE and CBE by Queen Elizabeth for her courageous humanitarian journalism. In 2014, the Women on the Move Awards recognized Sue with a Media Award, for her BBC Newsnight film on women fleeing female genital mutilation. Sadly, Sue passed away in October 2015, yet she remains an inspiration for many.

“This year, the Women on the Move Awards are honored to name the Media Award after her, and know that her legacy will continue to inspire courageous, thoughtful journalism,” said the spokesperson.

The 2016 Media Award went to Jackie Long and Lee Sorrell for their Channel 4 news piece called “Inside Yarl’s Wood.” A Parliamentary inquiry followed this special investigation and an independent review into conditions at Yarl’s Wood detention centre was commissioned. The centre has been branded “a place of national concern.” The special report exposed the ordeal of many refugee and migrant women detained and mistreated at the detention centre.

“The report was executed skillfully and demonstrated high commitment to ethical journalism,” said the spokesperson for Women on the Move. “It brought the sufferings of those women into the public domain. It gave the detained women of Yarl’s Wood a voice, a strong one to reach out and say ‘pay attention to our rights as human beings.’”

It was mainly a joyous event, but my heart sank when one speaker said, “Currently 10,000 children have gone missing from those running away from the war in Syria. Where are they? Have they been trafficked or kidnapped? What has happened to them? It seems that, as a world community, we, are not bothered. Maybe we would be if they were pet cats! But regarding children, who cares?”

After the event, I was able to talk with a senior official from the United Nations High Commission for Refugees (UNHCR), who commented on the tragedy of 60 million displaced people worldwide, saying, “We have to get some peace in Syria as urgently as we can, and even then, how are people going to return to a place that has been reduced to rubble.”