Minimalism + millennials: it’s not what you think 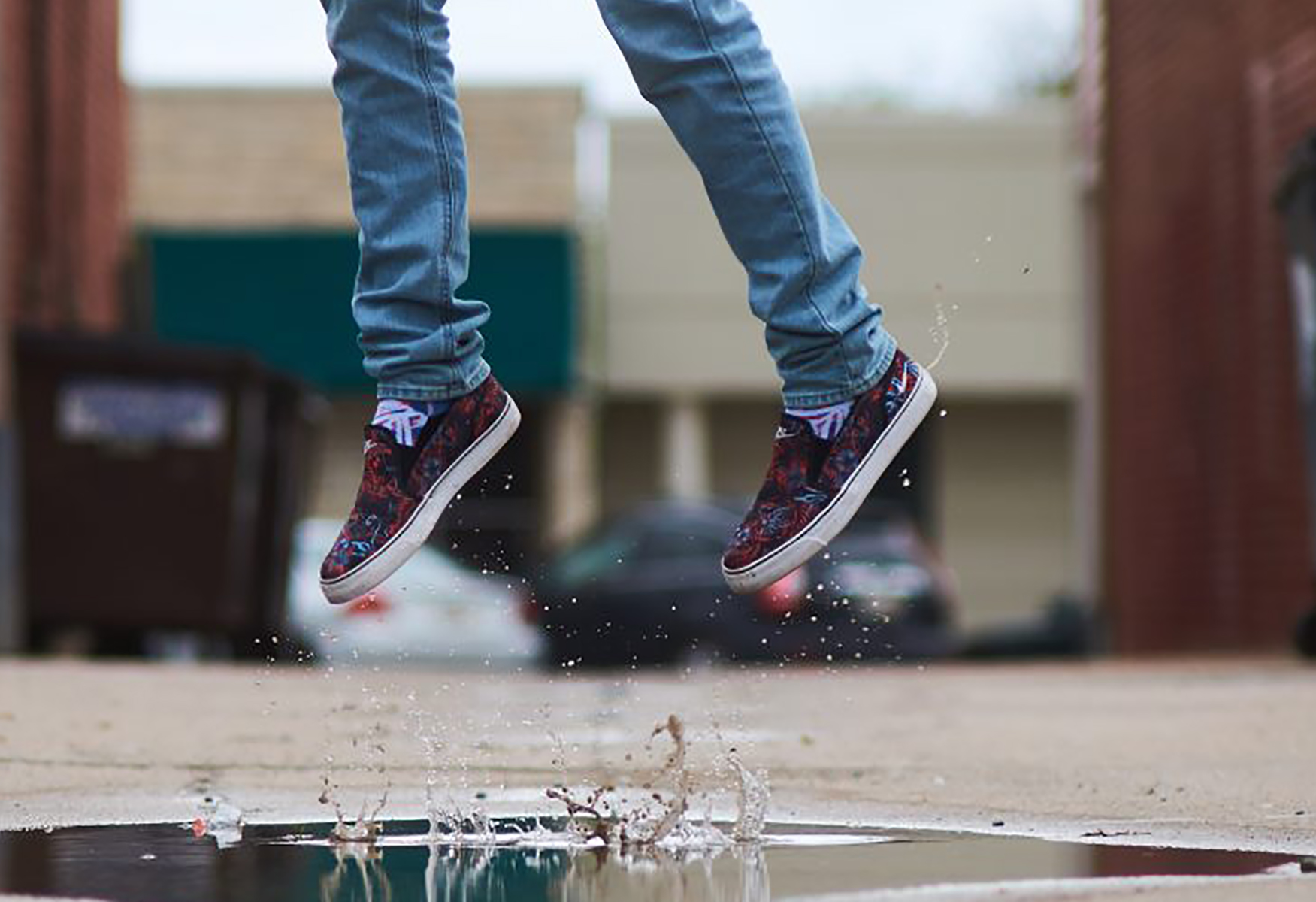 One of the surrealist effects of a flood is when the waters finally recede, leaving boats once used to navigate flooded streets now overturned in the middle of a dry, landlocked, and muddy intersection.

I distinctly remember this sinkhole near my grandparents house that flooded anytime it rained for longer than a few hours. During one particularly wet spring, someone, in an effort to make the best of a bad situation, had decided to float upon the dirty sinkhole flood waters with a pink pool float that eventually found itself deflated and entangled for the better part of a few weeks in a 10 foot tree in the middle of a dry and open field.

Recently, a rather insightful piece by Jacoba Urist appeared in the New York Times about the rise (and soon-coming-fall) of “minimalism” and its gospel of decluttered, anti-consumeristic centeredness found only at the conclusion of an individual’s journey to pare down his or her worldly possessions by interrogating each t-shirt individually to see which ones produce the most joy.

In the midst of her article, I was drawn to one observation in particular:

“Still, critics chide minimalists for a kind of faux self-discipline. After all, if you can afford to toss your stuff, you can probably reacquire it should you change your mind and, say, come to find that your home carbonation system is indispensable…Tiny houses are in vogue, but not mobile homes, which have been around a while. As Dak Kopec, an environmental psychologist at the Boston Architectural College explained, it’s ‘more prestigious to say you live in a tiny home than a recreational vehicle or camper.’”

The genesis of our issues as aspiring minimalists, as Urist notes, is the insatiable capitalism that forms the very ground upon which all of our propositions, personalities, and philosophies stand. Which seeks to explain why attempting to jettison an identity rooted in owning the most stuff will eventually devolve into an identity rooted in the ability to own the most stuff without having to own the most stuff. Essentially, minimalism quickly becomes a race to pay more for less.

“According to the sociologist Joel Stillerman, author of “The Sociology of Consumption,” among certain educated, upper-middle-class segments of the United States and other Western societies, there is a connection between minimalist design and a quest for well-being. But minimalism is also meant to project taste, refinement and aesthetic knowledge. “These people,” he said, “are making the statement that ‘I can afford to have less. I appreciate books and travel and good meals.’”

This enlightened capitalist impulse may also explain why wealthy white people moving back into the inner city have this rather pernicious habit of buying up properties “with character” in historically zoned districts. Typically, these districts end up having surprisingly strict requirements about wood window replacement, but surprisingly lax requirements about skyrocketing home values that push minorities renting next door back to the suburbs from which the aforementioned white people initially fled for more “diverse” communities downtown comprised of people with all the same bumper stickers on their Subarus.

“I brake for ALL THINGS CONSIDERED.”

As a pastor working for a denomination desperate to maintain its place in the world, I find the same impulse inherent in the ways in which us professional Christians talk about so-called “millennials” and how we can or can’t lure them into our sanctuaries for worship and Bible study, forgetting that the one requirement for being a millennial is disposable income and free time. Otherwise, you find yourself consigned to the generational dustbin known as “poverty” where one’s uniqueness and internet search histories go to die (namely, because they have no ad value).

The ecclesial hot-takes we pen and vociferously consume end up simply contradicting one another in a closed loop of conversations about the worship music preferences of 25 year olds, forgetting of course that 30% of the American workforce doesn’t get Sundays off anymore (this percentage rises the younger you are). Not many of these millennial exposés seek to cover the differences in the existential drives of, say, a working class, food insecure, and impoverished 25 year old single mother living in section 8 housing who took out a bad loan to cover tuition at a for-profit higher-ed institution, compared to those motivating the exhausted baby boomer next door who spends her days on a fixed income caring for two grandkids after losing her own 25 year old daughter to an opioid addiction.

“Do people in poverty  enjoy liturgical worship in cathedrals or guitar heavy synth-rock in converted shopping malls? I MUST KNOW!”

According to the logic of insatiable capitalism, both of these women are poor, and therefore experience and understand life in exactly the same way, which should remain altogether mysterious for those of us in higher tax brackets with more complex issues. So, when we talk despairingly about godless and rootless “millennials” wasting money on brunch and locally-sourced-artisanal-fedoras, we are standing on the shoulders of an entire system that understands the great question animating existence on this earth to be: “what’s the best way to spend all my extra resources?”

Should I go to church with my day off?

Should I volunteer more?

Should I go on incredible vacations or accrue too much modern furniture?

Should I overspend on a Midtown loft near a thriving farmer’s market, or a house in a historic district surrounded by Caucasians who are surrounded by African Americans, or a suburban brick monstrosity in a good school district?

Should I send my kids to the public school with “academy” in its name, or the Woody Guthrie School for Mouth Harps and Organic Lentils, or the Wells Fargo School for Ill-Fitting Suits and Fiduciary Infidelity?

At this moment of almost catatonic confusion about what to do with my “one wild and precious life,” like should I own more or less or better or greener or whole-30er, I remember that deflated pink pool float stuck in a tree 10 feet off the ground in the middle of a bone-dry field. And I’m quietly reminded that when the flood waters of my existential anxiety about what my life is supposed to be about recede, so will the usefulness of all the things I clung to in order to survive the storm of my uncertainty.

When my feet are back on solid ground -rooted in the historicity of the person of Jesus and his homeless, itinerant, and untimely execution at the hands of anxious religious elites and wealthy government-backed functionaries- I occasionally remember that a life measured by its ability to provide financial security at 65 after spending the previous 40 years at a job I hated, is a wasted one.

Even if it never ends with a Lincoln Town Car inefficiently straddling two spots in a Publix parking lot outside Bacon Raton.

What if our struggles as aspiring minimalists, millennials, middle aged, and middle class Christians are rooted not in the fact that we didn’t take the message of the Church (whatever it may call itself for you) seriously enough, but that we took the message we received too seriously. The message teaching us subversively-

(through deacon, elder, and university boards made up of wealthy businessmen, the expected gender and education of our pastors and teachers, the size and feel of our buildings, and the sociological makeup of our sanctuaries and seminars)

-that people with the most money get to make the rules about God, about government, and about the good life.

Because those people, the successful ones steering boats in that Merrill Lynch commercial during Wheel, they conquer countries, they erect palaces, they have excellent taste, they even have the fellowship hall and the library named after them, and if God (or anyone else) tries to get in their way, historically, they have a habit of crucifying him. However, the one thing they’ve never been able to do, despite money and power and unfettered access to golf carts, is to keep God buried once they’ve laid him in the tomb.

Which could explain why the average Christian (numerically speaking) in our world today isn’t an Evangelical man in the Southeast, but an impoverished, oppressed, Pentecostal-Catholic, Latin American woman.

No matter how much the Christian Church in America earns, or saves, or builds, or owns, or votes, or wins, if it continues to unquestioningly assume that value has anything at all to do with wealth and power, it will eventually find itself (once the waters of this life have receded) deflated, haggard, and strangely flapping in the breeze of an endlessly sunny day.

Or, as Jesus once remarked, for those of us who wish to save our lives, we must lose them, because it’s the anxious saving of our lives, that actually ends up doing us all in.