Mothers in Tough Times: Celebrating The Unique Qualities of our Moms 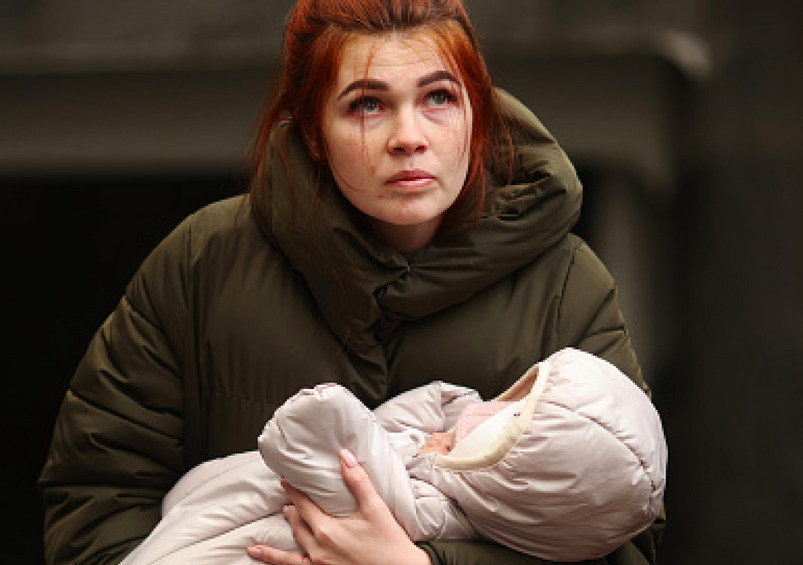 Mother’s Day is when, amid flowers, cards and perhaps a meal out, we remember happy memories of our mothers. It’s a day rich in sentiment, yet there’s more to mothers than the cosiness of this celebration allows for. You see, thinking about something to say this year on Mother’s Day, I found myself struggling as images of soldiers, weapons and shelled buildings kept edging into my mind.

I realised that what had a particular impact on me were images of women. Yes, there were female soldiers and surgeons, but what struck me hard were the pictures of women with children. You saw them: carrying babies over broken bridges as snow fell, putting tearful toddlers on trains to an unknown future, comforting infants in freezing basements, and weeping over sons and daughters ‘missing in action’ or dead. In short: mothers.

Tempting as it is to think that these women are some special race, hardened by centuries of life out on the harsh edges of Europe, in reality what we have seen are ordinary mothers, simply doing what they have to do. Were you to ask them why they are queuing in icy winds for food, struggling to protect their children from flying shrapnel or acting as a human shield for their children, their answer would be simple: ‘It’s what mothers do.’ It is.

Without rejecting those flowers, the cards and the happy memories of tradition, I think it will do us no harm to celebrate those tough qualities of motherhood.

First, mothers face tough challenges. Any woman taking on children has my respect and admiration. We celebrate people who climb Everest, get a degree or are given a knighthood, but these are insignificant compared to child rearing. I know that in an ideal world mothers work with fathers, but this world is far from ideal. Even today, fathers are often absent: away on business, called up to fight or simply gone missing – either temporarily down the pub or at the match or, sadly, on a permanent basis. All too frequently it is mothers who hold a family together and lead the children along the hard road of life. And children are very challenging.

You don’t know what you are going to have to do or suffer for them. That tough challenge is there with the most famous of births. When Joseph and Mary took the infant Jesus to the temple shortly after he was born, the aged Simeon prophesied that the infant would affect the world and then warned Mary, ‘And a sword will pierce your very soul’ (Luke 2:35 NLT). Oh, it may be as routine as keeping clothes on the kids and food on the table, or it may be as spectacular as dodging sniper fire to get food, but motherhood can be tough and let’s honour the fact.

Second, mothers everywhere need tough courage. One of the most ancient pieces of advice is not to come between a mother bear and her cub. In fact, it’s wise to never come between any mother – animal or human – and her offspring. Mothers show courage at every level: catching a spider in the child’s bedroom or tiptoeing around unexploded artillery shells to a safer place.

Third, mothers show tough commitment. Mothers and children are the gold standard for enduring and unbreakable commitment. In Isaiah 49 God reassures his people by saying, ‘Can a mother forget her nursing child? Can she feel no love for the child she has borne? But even if that were possible, I would not forget you!’ (v.15 NLT). Mothers demonstrate commitment, come what may.

Finally, mothers show tough care. Mothers are tough but, at their best, they somehow manage to hide it behind love. Indeed, their toughness arises from their love. It’s striking that Jesus uses a maternal image of himself. As he grieved over rebellious and doomed Jerusalem, he said, ‘Jerusalem, Jerusalem, you who kill the prophets and stone those sent to you, how often I have longed to gather your children together, as a hen gathers her chicks under her wings, and you were not willing’ (Matthew 23:37 NIV). Tough love is not a cliché, it’s a reality.

God made mothers and equipped them not just for the best of times but also the worst. This Mother’s Day let’s honour that tough side of motherhood. When there is victory and peace for Ukraine, statues will doubtless be erected to the brave men and women who fought for it. But I hope there will also be a statue of the mothers: they deserve to be honoured. And not just there, but everywhere.