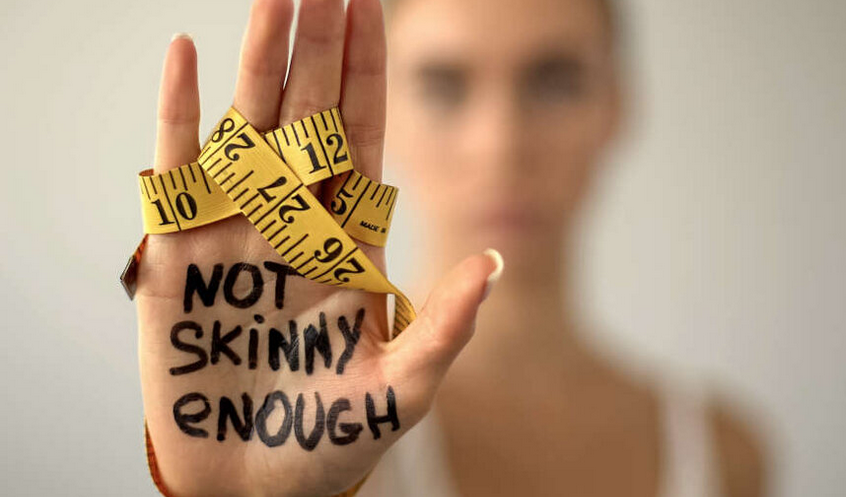 “Jess, you will either live with this, for the rest of your life or you will lose your life to it.”

Those were the words of my doctor. After I heard them, I sat in my room with tears streaming down my face. “God, where are you? Why are you letting me struggle like this?”

When I was young, I used to see celebrities in magazines and think to myself, ‘just eat’. Never in a million years did I think that I would find myself in this battle with anorexia.

I grew up being stopped by people regularly saying, “oh, you’re so pretty.” Which for most people would be a simple compliment? But for me, it became my identity.

An identity, that I strived to live up to, to maintain, to be worthy of.

One day whilst I was spending time with a group of friends, someone commented about my weight (in a negative way) and it absolutely crushed me. Their words pulled the rug right out from under me and triggered a spiral into an unhealthy body consciousness.

When I looked in the mirror, I loathed what I saw.

I felt so ashamed of what I looked like, that I decided to go on a diet to escape these tormenting thoughts and feelings.

Anorexia promised me the world but left me with nothing.

It told me that I would be happier, that everyone would love me, that I would be good enough and all that all the pain would go but instead, I felt more broken, more isolated and no matter how skinny I was, I was never felt ‘good enough.’

The battle was real and one I wish upon no one. I often wondered why God never set me free when I prayed through painful breaths. But now I can understand that He was using my struggle to teach me valuable lessons and he didn’t just want to remove the disorder.

He wanted to get to the root. The cause of my pain.

Here are some things I learnt along the way. I hope they encourage you.

HE HAD A NEW IDENTITY FOR ME.

My identity was in being ‘thin’ which gave me a false sense of worth. It covered up my insecurities and lack of understanding around my identity. I had to come to the understanding that I am fully known, but yet fully loved by God and those who count. My identity had to be found in the one who created me not in the fleeting things in this world.

When we find our identity in Him, His love becomes our new mirror.

I’ll admit, I often felt abandoned by God. He appeared to be silent and a million miles away. On one occasion, I was at a worship conference, and I felt the Holy Spirit show me that He had surrounded me with His presence in every moment. The Bible says that He is close to the broken hearted. He is with you. He cares. He sees. He knows. He hears. You are not alone in this battle. Deuteronomy 20:4 says, “For the Lord your God is the one who goes with you to fight for you against your enemies to give you victory.”

The lies of the enemy are a weapon against us, but the Word of God is a weapon fighting for our freedom and future.

Our thinking and belief system can be shaped by so many different things. When I was struggling with my eating disorder my belief systems and thinking became distorted and I was bound to the lies that I believed.

The only way to overcome a lie, is with the truth.

The Bible talks about how the Word of God is sharper than any two-edged sword and can cut through every lie no matter how strong it is. When we have been in a battle with our mind, we need to retrain our mind to think differently and create new neural pathways with the Word of God. The neural pathways get stronger with repetition, so we need to actively declare His word and truth over our lives.

When we say no to fear and position ourselves in the love of God, we remind the enemy that he has lost the battle.

Fear is one of the greatest weapons that my eating disorder used against me. Fear of the unknown, fear of becoming bigger, fear of food, fear of people’s judgement, fear of pain, and the list continues. Fear appears before us like a brick wall that we can’t see past or break past.

There is no fear in love, but perfect love casts out all fear. For fear has to do with punishment. The word perfect comes from the Greek word ‘teleia’ which means ‘complete.’

We need to let God complete His love in our lives by us accepting it.

When there is self-hate and self-punishment, we don’t think we are worthy to be loved by God, but He created you and He loves you and we need to go on a journey of learning to trust in His love. Our

Forgiveness holds us bound and as a slave to the words and things that someone did to us. It gives those words power in our lives as we continue to carry them in our heart, when we forgive, we break the power of every offence.

My friend’s comment played a huge role in my eating disorder, and I had become a slave to the words that she had spoken over me and the offence that I carried in my heart. One night, I felt the Holy Spirit say that He wanted me to forgive her. He wanted me to let her off the hook. Something shifted in my life that night. The words that had been spoken over me lost power as I decided to let them go.

My story Redefined by Grace

Today my story is living proof that there is always hope and that God can turn battles around for good to bring glory to His name.

I now work as an eating disorder therapist and recovery coach and sit with people who are struggling in the same area I once used to.

I’m able to share my story and help many people get to a life of freedom and purpose.

Eating Disorders impact more than 30 million people in the world and have the highest mortality rate out of any mental illness. Shame keeps you isolated with your struggle, but you cannot do this journey alone you need an army of people to fight with you. I encourage you to reach out if you’re struggling, because your freedom and future is worth fighting for.

Eating Disorders don’t just make people skinny, they have the highest mortality rate of any mental illness, they rob people of their destiny, they isolate people, they torment people, they inflict emotional pain, they ruin relationships, they distort identity, they taint people’s personalities, they make people a slave to them and they are the epitome of destruction.

John 10:10 says, “The thief comes only to steal and kill and destroy; I have come that they may have life and have it to the full.”

Eating Disorders are an assignment of the enemy to rob a generation of their destiny and inheritance.

Eating Disorders are not just as simple as ‘just eat’ they are often a heart and head issue. There is no quick fix for the heart, but instead a relationship with Jesus sifts through the layers of our heart, mind and emotions and brings His healing.

The things that God has taught me in my freedom journey of overcoming anorexia has helped me fight and conquer future battles because He has imparted a new strength, conviction, and resilience in my life.

As a therapist, coach and pastor I see so many people in the midst of the battle give up because they think that their struggle is their destiny, yet God is not finished writing your story. His story always ends in victory if we allow Him to walk us through the struggle, pain and lies.

Recovery has many ups and downs, it is one step forward and sometimes two backwards but Proverbs 24:16 says, “For though the righteous fall seven times, they rise again.

You may feel weak and defeated right now but don’t give up!

He is with you in the battle, and He will strengthen you on your freedom journey. He has got you and got this.

Jess Dyson has a passion to see people know Jesus and walk in freedom and their dreams. Jess is the founder of The Redefined Movement a movement with a mission to equip women struggling with eating disorders to live in freedom and the purposes of God. Sabrina Peters is a Christian writer, an avid Sex & Relationships blogger and part of the team at Kingdomcity. She is married to Ben and mother to Liberty & Lincoln. www.sabrinapeters.com.