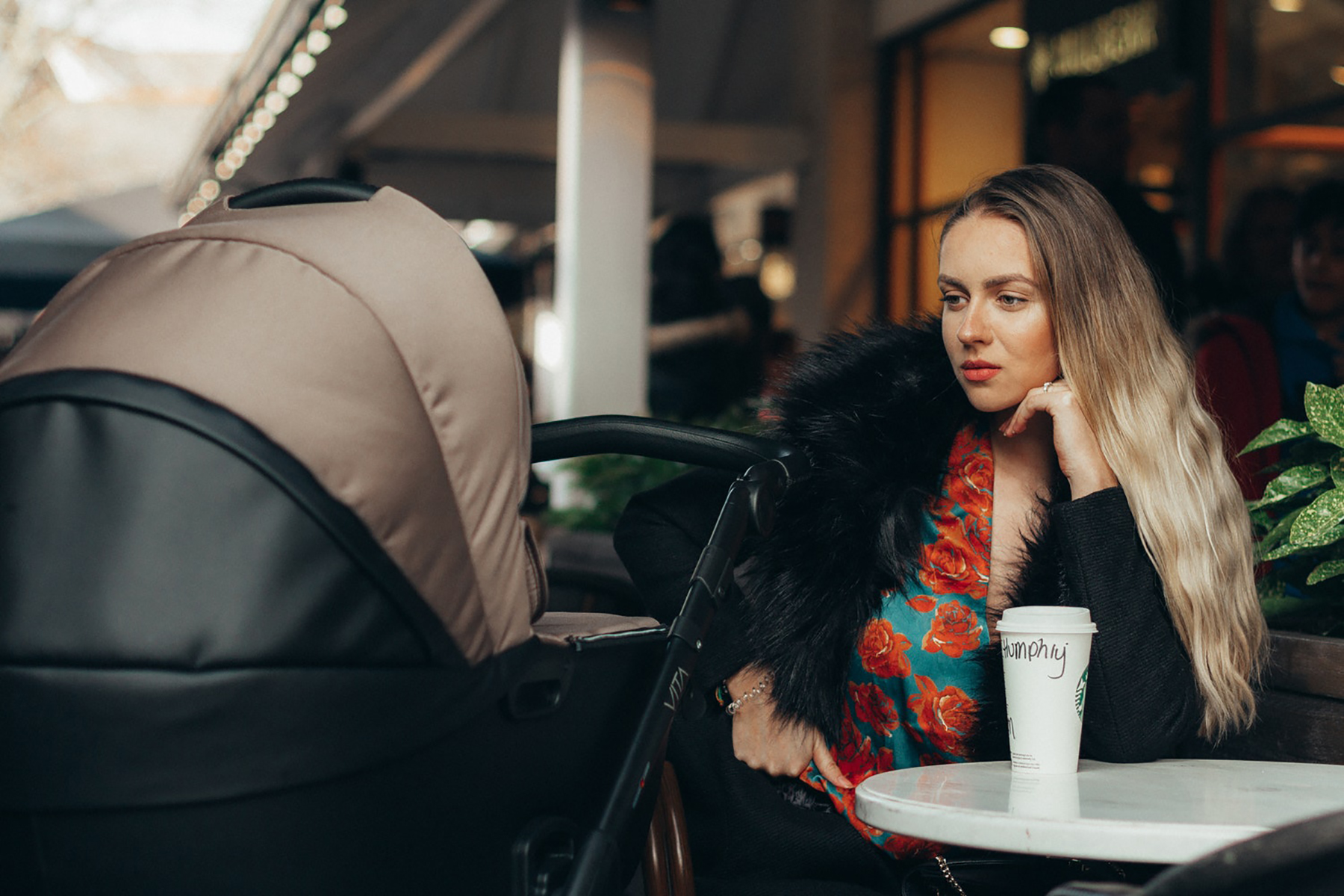 Based in Washington D.C., the new store, which employs 25 people, is specifically for staff who are deaf, hard of hearing, or hearing partners and proficient in American Sign Language (ASL).

The idea was inspired by a similar store, which opened in Malaysia in 2016.

The Signing Store is near the intersection of 6th and H streets in Washington, D.C. – just down the street from the campus of Gallaudet University, which Gilsbach attended as an undergraduate. Gallaudet was founded in 1864 and is the world’s only university uniquely designed to educate Deaf and hard-of-hearing students.

Crystal Harris, a new barista who works in financial services at Gallaudet and is pursuing a doctorate in education, said the neighborhood around the store – thanks in large part to the university – is a vibrant hub.

“This neighborhood is one of the most diverse I’ve seen since moving to D.C.,” Harris said, through an interpreter. “I hope the Signing Store will be embraced and accepted by those that live in this community. The fact that it is so close to Gallaudet University makes it that much more special.” 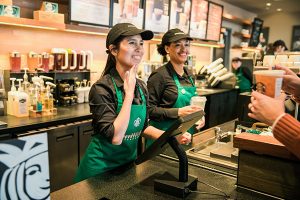 Gallaudet is officially bilingual, using American Sign Language (ASL) and English for all classes and events, and the Signing Store is bilingual as well. All store partners are proficient in ASL, whether they are hearing, hard of hearing or Deaf. Deaf partners wear special green aprons embroidered with the ASL finger spelling of Starbucks. Hearing partners wear traditional green aprons with “I Sign” pins, which are actually available to any Starbucks partner worldwide with sign language proficiency.

For the hearing – even those just ducking in to grab a cup of coffee to go – the Signing Store offers an opportunity to learn something. Maybe it’s how to sign a word like espresso in ASL from the “sign of the week” chalkboard above the register. Or maybe it’s some little insight into the Deaf experience or Deaf culture, like seeing the way Deaf partners interact with each other, or being a hearing customer able to communicate with partners and order a beverage without speaking a word.

Harris, who identifies as hard of hearing, grew up in Georgia. She said as someone living with hearing loss, versus being totally Deaf, existing in both worlds can be a challenge. The Deaf community includes a wide spectrum of people without any hearing or with limited hearing as well as their hearing allies. “This store will represent what it means to bring communities together. All of them,” Harris said. In the days before opening, behind the store’s covered windows that read “coming soon,” partners worked hard to prepare the space and themselves. But they also took time to celebrate how far they’ve come, both professionally and personally. When Margaret Houston, district manager, presented them with their official store aprons, they laughed and cried and cheered each other on, both vocally and with fingers waving, the ASL sign for applause.

“This store will represent what it means to bring communities together. All of them,” Harris said.

In the days before opening, behind the store’s covered windows that read “coming soon,” partners worked hard to prepare the space and themselves. But they also took time to celebrate how far they’ve come, both professionally and personally. When Margaret Houston, district manager, presented them with their official store aprons, they laughed and cried and cheered each other on, both vocally and with fingers waving, the ASL sign for applause.

Barista Joey Lewis, who was born in Korea and at 5 was adopted into a family with 15 siblings in Iowa, said it was a historic moment. Lewis worked as a federal employee during the Obama administration, and is currently a graduate student at Gallaudet. He hopes to become a history teacher for Deaf children.

“I’m excited to be part of signing store and to share with my students someday and say I was part of the first Deaf Starbucks in America,” Lewis said, through an interpreter. “I’m most excited about showing what a Deaf-centered business can look like.”

Like any store, the personalities of the store partners are as far-flung as their origins in California and Georgia and Iowa and Kansas and North Carolina. Yet they all speak the same language, ASL, and regardless of where they came from, their stories echo with common themes. Many grew up loved and supported by family and friends, yet they felt misunderstood and isolated. Many were the only Deaf member of their families, and some were the only Deaf person in their entire school or city. All had to work extra hard to keep up in systems designed for the hearing. At the Signing Store, they say they have found the type of immersive community they never thought possible where everyone speaks and works using the same language: ASL.

After he earned his master’s degree eight years ago, Gilsbach had difficulty finding a job in his field, college student development and counseling. That’s when he decided to apply at a Starbucks in California. This is another common theme among the experiences of Signing Store employees; the unemployment rate is high among people who are Deaf or hard of hearing, and many partners have had trouble finding work regardless of their education and qualifications.

“There is fear of it being a risk to hire Deaf individuals, and a lot of companies are not willing to take that risk,” said Gilsbach, who quickly moved up the ranks to become a store manager. After more than three years working at Starbucks stores in California, he relocated to Washington, D.C., a few months ago to help open the Signing Store.

“This store hopefully also shows what’s possible, opportunity-wise. As a Deaf person, you can have a job and you can have money and you can have life skills. And you can engage with people in the signing and non-signing community,” Gilsbach said. “I’m excited to start this journey and to see what the Deaf and hearing communities can do together.”

Gilsbach said the store provides not just jobs, but also career potential for Deaf and hard of hearing people who may have been pushed aside. He’s already promoted one barista to shift supervisor – Kylie Garcia, a Gallaudet student. Garcia said she’s planning to pursue a master’s degree, and to switch majors from biology to business. Before working for Starbucks, she, too, was frustrated by not being able to find a job.

“Don’t see me as a risk, see me as an opportunity,” Garcia said, through an interpreter. “Starbucks has overcome this. Here there are no barriers. I love being able to sign and communicate freely. I love the vibe, the energy and the opportunity to expose others to Deaf culture.”

At a pre-opening celebration Monday night, partners and special guests mingled in the new store. Oscar-winning Deaf actress Marlee Matlin came by to surprise store partners, and spent hours chatting and visiting. Store manager Gilsbach welcomed everyone to the store, and Howard Rosenblum from the National Association of the Deaf accepted a $50,000 donation from the Starbucks Foundation.

“We are making history. You are here. Remember where you were this date,” Rosenblum told everyone at the celebration. “I want to see many more of these. Please lead the way for other corporations and other businesses to open other signing stores and restaurants, starting this evening. Starting right here.”

“What you have created here is not just an opportunity for employment and leadership for people who are Deaf and a way for them to show their wonderful talents, but a place where we will be able to see the vibrancy of our language,” Cordano signed, with an interpreter speaking. She promised to drop by frequently for coffee.

There are more than 200 Deaf employees working at Starbucks stores worldwide, but typically those partners are working alongside hearing coworkers who don’t necessarily know sign language, said Marthalee Galeota, senior manager for accessibility at Starbucks.

“This is a first for us, and though it’s a mix of hearing, hard of hearing and Deaf partners, the common denominator is sign language, which puts everybody on an equal footing,” Galeota said.

A team of Deaf Starbucks partners and hearing allies led the effort to launch the Washington, D.C., store after being inspired by a similar store in Kuala Lumpur, Malaysia, which opened in 2016 with nine Deaf partners. The Signing Store is just one part of the company’s larger efforts to create a culture of inclusion, to hire and create career opportunities for people with disabilities and to create accessible spaces and experiences, Galena said.

The store itself was designed with accessibility in mind, with more open space, anti-glare surfaces, and visual displays for customers to check and pick up orders.

“We really want people to experience the excitement of talking to somebody differently than they might have before,” Galeota said. “All the barriers are gone from being able to communicate, or from people being able to demonstrate their skills and show off the talent they have. We think this store celebrates the culture of human connection on a deep level.”