Supreme Court Agrees to Hear One of the Biggest Abortion Cases Since Roe v. Wade

This week, the U.S. Supreme Court gave the pro-life movement a reason to hope.

The court announced on Monday that it would hear a case involving a Mississippi law to decide whether states can pass laws that protect life from abortion before an unborn baby is viable (when he or she can survive outside the womb)—which is currently considered to be around 22-23 weeks gestation. 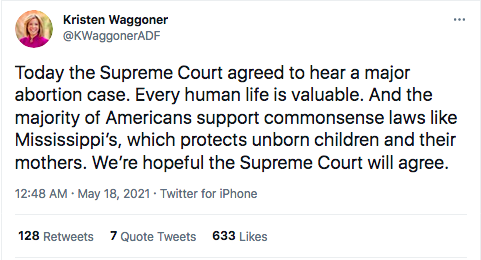 Praise God! This is great news. And it speaks to the strides that the pro-life movement has made since the Supreme Court’s Roe v. Wade decision, which legalized abortion across the country.

Though abortion activists would have you believe that Mississippi’s policy is extreme, that’s not even close to true…U.S. law is.

In fact, 90 percent of countries worldwide have laws limiting abortion at 15 weeks or earlier like Mississippi’s. We are one of only four nations that permits abortion-on-demand throughout all nine months of pregnancy, along with China and North Korea.

That’s quite the short list. And it’s certainly not something to be proud of.

The reality is that most Americans support commonsense laws like Mississippi’s, which protects unborn children and their mothers.

At 15 weeks, unborn babies have a heartbeat, can move around and kick, sense movement outside the womb, taste what mom eats, open and close their fingers, and hiccup. They can also likely sense pain—which is undoubtedly what an abortion inflicts when it requires the unborn baby to be crushed and torn apart. That has no place in a civilized society.

The Mississippi law recognizes that women deserve real health care, not dangerous procedures that are unnecessary and devastating. This law ensures women are not put at the greater risk of death, illness, or psychological trauma that later-term abortions cause. For example, in abortions performed after 15 weeks, women face a higher risk of needing a hysterectomy, other reparative surgery, or a blood transfusion. The risk of a woman dying due to an abortion also increases exponentially as her pregnancy progresses.