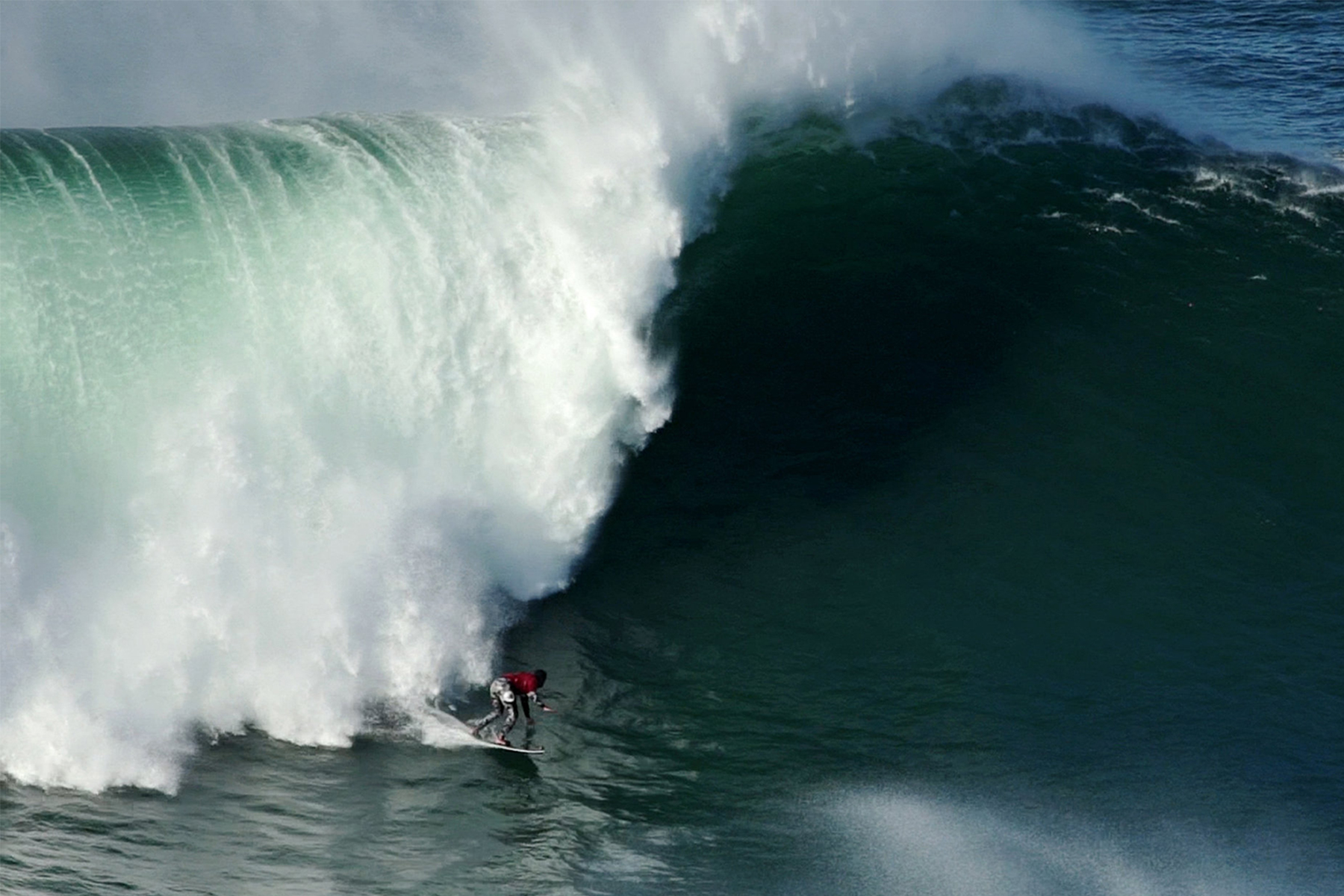 If I can do all this and I’m blind, what can you achieve?’

This is a famous quote from Derek Rabelo, a Brazilian blind surfer whose total life is in God’s hands. He is a young man with great courage, inspiration and motivation, and as he releases his new book, I sat down with him to discuss life and faith.

Derek was born blind with congenital glaucoma. After three unsuccessful operations he grew up resigned to living his life to the utmost for his Lord.

His heartbroken parents prayed all the time for their little boy. Derek’s father, Ernesto remembered one time when Derek, as a baby was sleeping in a cot in his parent’s room. Derek would wake at about 5am stand up and cry out for his parents. One day he stood up and was facing the wall crying. It broke his father’s heart, as it was the realization that his son was blind. Ernesto was relating the story to me and said he couldn’t go on with this as he was crying so much from the remembrance of his little blind boy. The emotion was just too great.

His father was a surfer and so decided nothing would stop his beloved son from learning to surf as this was something he could teach him. His mother was a prayer warrior. Derek’s life was filled with so much love and care from his parents and extended family, and this provided the hope he had for his future.

When he first started to learn to surf as a teenager he encountered great difficulty with some huge and ferocious waves. Because of this trauma Derek nearly abandoned his desire to surf. But what would have become of him and the destiny that was placed within by Almighty God? 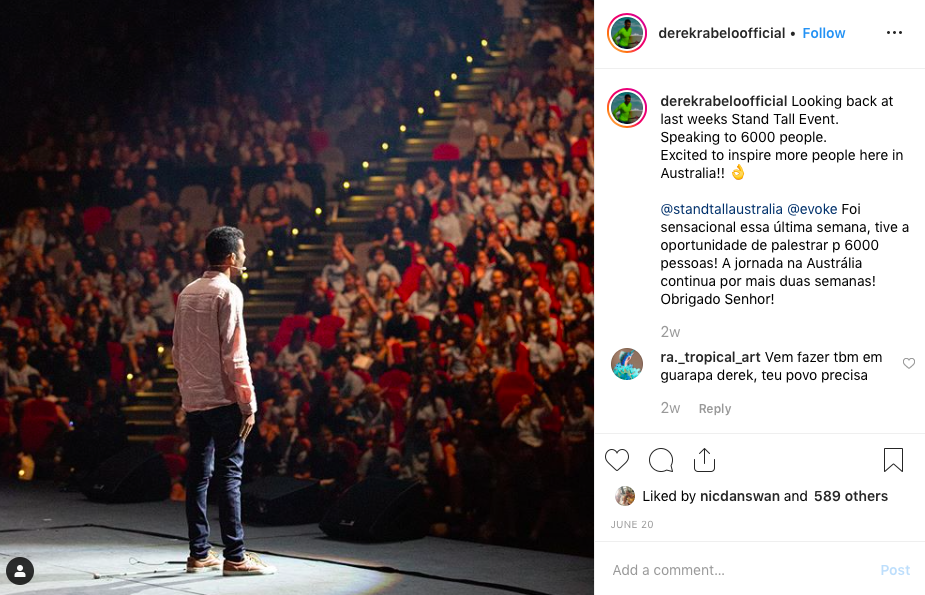 Derek states, “This is how my surfing career began. Not a good start, but it made me think about what was in my heart; what actually motivated me and made me determined to change my thinking and continue on. It wasn’t an easy decision and I had to turn around and think about the cost, which I hadn’t really thought about before. When you are faced with some sort of trauma, it helps you to stop and think about what you really want in life; what you are called to do. What will ultimately satisfy you and what your future is meant to become.”

Derek has been formidable in his quest for greatness. He knew what he was called to do. But there was one time when he had to make a decision about his life – whether to pursue a profession or turn his life over to his heart’s desire – surfing. That was a huge undertaking for a young man. But, of course, his heart won over. This was God’s destiny for him.

However, life hasn’t always been easy for him. His school years were extremely difficult. He had to contend with some schools refusing to accept him on the grounds of his ‘disability’. His parents were determined to provide the best of education for him.

Bullying was another issue at school. He was mocked, laughed at and belittled – all because he was blind. But Derek rose above this and moved forward to achieve what he needed to. He knew it was important to overcome all this if he was to be an influence in the world.

Derek went on his first adventure to Hawaii to surf, with a close friend. Many people were trying to discourage him because of the huge waves there. These people were trying to protect him but it made him confused if this was the right thing to do only for a short time. But he was determined to go. He surfed Pipeline with Tom Carroll, former world champion and Derek was hooked. He knew what he wanted to do, what he was called to do!

Derek travelled the world surfing, then he proceeded to speak to groups of people about what anyone can do. His aim was to encourage people to go for their best – what is inside of them. He encouraged them to overcome their fears, to take off the limitations they have put on themselves and to trust God.

In his travels Derek came to Australia and ended up in Perth Western Australia. He was to speak at Margaret Court’s church (the former world champion tennis player). However, God had other things in mind for him.

However, God was at work, there was a divine appointment for him in the West. A German girl called Madeline was studying at Margaret Court’s Bible College. She came to listen to Derek speak. She had heard of him and was so inspired by his life that she wanted to hear what he had to say. Interestingly, she came down the front to where Derek was sitting and fell over his foot. That was their first encounter!

Maddy recalls, “For me I actually wanted to meet him. I wasn’t thinking about dating – just his story was so inspirational to me. I wanted to be friends with someone who didn’t let anything stop him. I just wanted a friendship. He inspired me so much and I wanted to be around him.”

So after a very short time as friends a courtship evolved and they started to talk about marriage. But many people were negative about this union.

Maddy said, “Many non-Christians and even Christians were saying to me, ‘Are you sure about this?’ All of them doubted the validity of this relationship. Many people said, ‘It’s going to be so hard. You want to have children and he is blind. It won’t be easy.’

But love overruled and they married in Margaret River at a beautiful ceremony. The great blessing also was that their parents could come from Germany and Brazil to be at this momentous occasion.

Derek was determined to ride some ‘big’ waves – actually monsters, so he had to do a lot of training to prepare for this ‘super adventure’. His great dream was to surf the biggest waves in the world.

I want to tell you – yes he has done this. He surfed a 50 feet wave at Nazare in Portugal. “What was I thinking?” Derek exclaimed. “These waves were like tsunamis. I knew this is what I wanted to do, but… most people would have thought I was crazy. Well maybe… just a little? But I couldn’t stop until I rode the biggest wave in the world.”

Maddy was there with him. She explained that for the first time Derek said he felt nervous and then she felt the same. Normally Derek is at peace about surfing but… this time… “I received some emails from a really well known big wave rider telling me that he knows that I have a lot of skills, but also telling me that I should stop doing what I was doing, that I should not even think anymore about surfing Nazaré. That I had no idea how dangerous Nazaré was and I was putting myself at risk, as well as my family and friends. I felt very discouraged.”

But Derek didn’t back down. He was towed out with a jet ski and then told when the monster wave was coming. This was the 50 feet wave! He caught the wave but after a while he fell into the water. The jet ski missed him and then two more giants descended upon him. But thanks to God he was okay. And in fact he was thrilled he had achieved this.

Derek’s faith is in his God and he won’t let fear rule him.

Derek and Maddy are expecting their first child on Christmas Eve this year and they are very excited about this added addition to their family.

Derek’s biography, ‘Beyond These Eyes’, is available now.

***
Lynn Goldsmith is a freelance journalist and the author of ‘Beyond These Eyes’. She is also the former editor of Alive magazine.