Yes, my kids are pastor’s kids 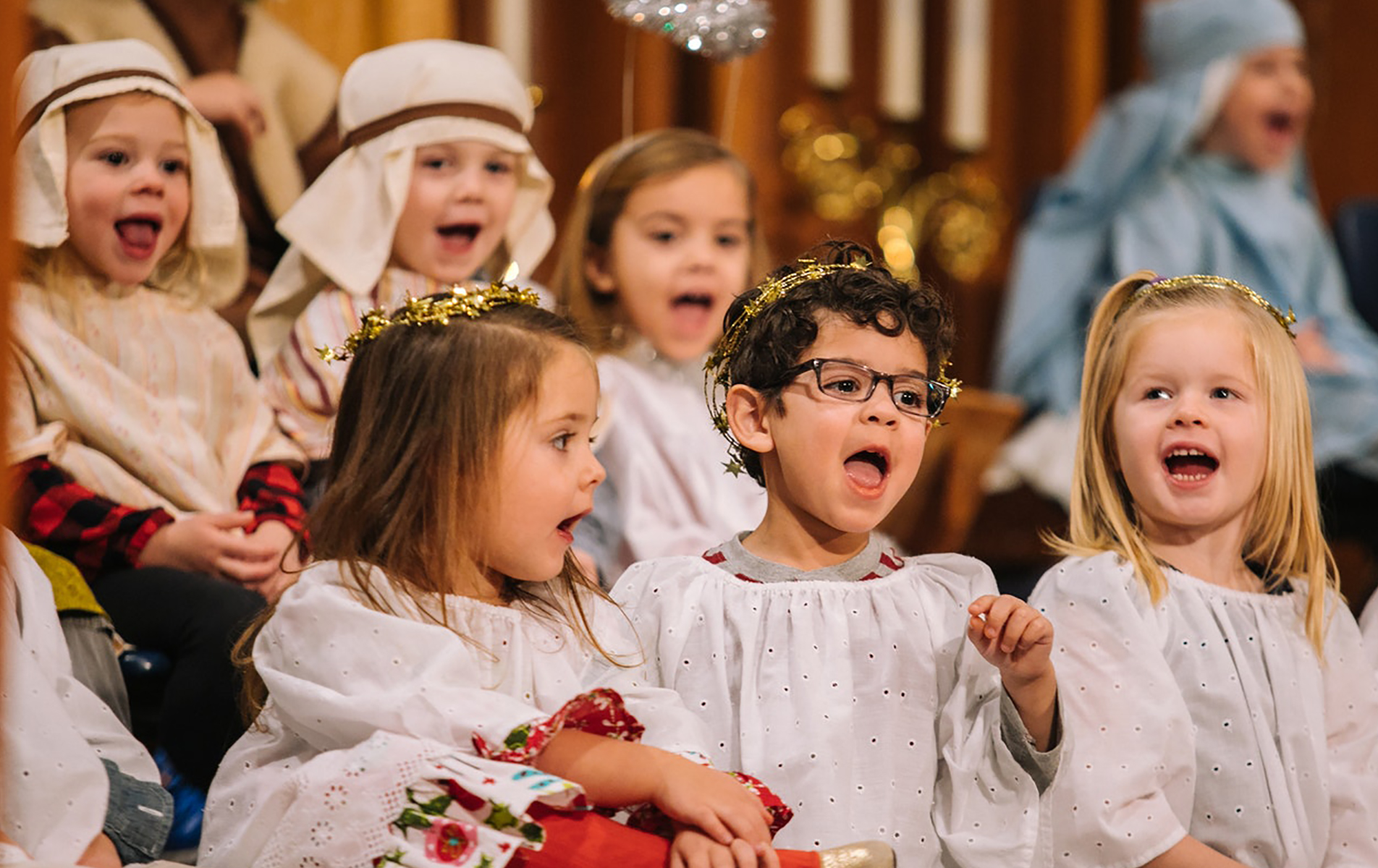 The idea of my children being “pastor’s kids” has always been a dreaded thought in the back of my mind. I’ve heard so many stories of PK’s, most of them more like nightmares. It’s not something any mother likes to think about- her children rejecting the Lord and turning from the Faith. And it seems PK’s wander at an extremely high rate. What’s a pastor and his wife to do? Hit their knees in prayer, that’s what. It’s our greatest defense and our only hope.

RELATED: So what’s it like being the pastor’s wife?

I’ll never forget, as we were drawing nearer to planting Westside, we visited a well-known church about an hour from our home to meet with the pastor and get counsel. As the service ended and we were waiting to be introduced, a couple of young kids in the seats ahead of us climbed right up and started running across the chairs. Their dad grabbed one with one arm and one with the other arm, looked around, and jokingly said, “Hey, whose kids are these anyway?”

I’ll give you one guess who their dad was… yup, the pastor of the church. I’ll tell you, at that moment so many of my fears seemed to melt away. It was JUST what I needed to see and hear that day. It was such a glimpse of love, and joy, and grace in my mind. We’ve all seen kids run across the pews, and to know the PK’s did it and were treated like all the other kids who’d done it was, relieving.

Again, (and I fear you’ll think I’m exaggerating, or flat out lying, or making up a group of people who don’t really exist when I say this, because I said it a few times in Part One) but, our local congregation has been so supportive in this area. They truly love our kids and love on them week after week. It’s been a rare occasion when I’ve felt someone putting pressure on our children because of who their parents are. You have no idea HOW grateful I am for that.

However, at times we have had to un-apologetically remind people our kids are just like the other kids in Children’s Ministry. They are little sinners in need of grace. Little humans trying to figure out their way through life like the rest of us. Little souls who need Jesus just as much as anyone else. Just because the Lord called their dad to be a pastor, doesn’t mean they will be perfect. I think it can get confusing for them because the church is like their second home. They are comfortable there. And what does any kid do in a home they are comfortable in? They make themselves at home. So, they do find themselves doing things maybe other kids wouldn’t do at church, or they may find themselves rebelling because of the pressure they feel is put on them that they don’t know what to do with or how to handle.

They may not always be the best example among their peers. Do we aim for that? Absolutely! As all Christian parents should. But we are doing them a disservice if we put unrealistic expectations on them and make them feel they must ‘perform’. No one should have to come to church wearing a mask, pretending to be someone or something they are not. We all have the freedom to come as we are. Our kids, your kids, us as adults, we are all in this together and when we are allowed to be real and authentic, that is how true family is formed and how true change takes place.

It’s a training ground. I don’t mean that our kids should run amok and get away with whatever their hearts desire. Our ushers and teachers know they not only have our permission, but we expect that if one of the kids is out of line, they correct them, in love. The kids know when someone cares. They see it in the eyes and hear it in the voice. It’s rarely what we say, but how we say it.

Maybe you haven’t thought of it this way before, but ministry is a sacrifice for the pastor’s kids as well. PKs actually miss out on a lot. Various things for various reasons. One example in our home would be that our son has played Little League since he was four. It’s been manageable to an extent, however with the church growing and other ministries springing out of it, we are unable to keep up with that schedule at this point and he is not playing this season. We have also been approached by multiple travel ball teams who wanted him to pitch. Because those games are on weekends, we had to decline.

Also, one of our daughters is a gymnast and every coach she’s had has all but begged us to allow her to compete, to begin the road to the Olympics. This requires a minimum of 16 hours of gym time in addition to weekend competitions. We either say ‘yes’ and she never sees Dad, and is rarely in church, or we make the hard call to say, ‘no.’  Mom-guilt can sneak in… “I’m killing their dreams. We are withholding amazing opportunities. If their dad wasn’t a pastor they would excel and be the next pro athlete.” LOL. Ok, that’s a little overboard and not the best example, but you see what I mean. It can eat at a mama’s heart, thinking her kids are missing out on anything, let alone because their parents are busy serving others. There are other non-sports related examples, of course.

Another thing PKs deal with is other kids not wanting to be their friends because they are intimidated by who the parents are. “She’s the pastor’s daughter, she’s not allowed to do this or that.” Or, “Oh his dad is the pastor, I’ll have to be perfect if I hang out with him.”  They also deal with the opposite… other kids wanting to be their friend because of who their parents are. As they get older, they may face things such as intense peer pressure by those trying to get them to fall just to get a good laugh out of it… “Ha-ha, I got the pastor’s kid to _____ (you fill in the blank).”

One more example for ya. One other way PKs make sacrifices would be something like this: in our home, because the Lord has given us a national ministry, we have to be very careful who has our address. We use a PO box in most cases. So, the kids may want certain friends to come over and we have to tell them no. Unfortunately, the fewer people who have our address, the better it is for our family. That can be rough on the kiddos, they don’t always understand. We have had the hard talk with them that there’s a possibility of their father someday being imprisoned, or worse, for being outspoken in this culture.

I’d say most PKs struggle with the exact opposite. In a lot of cases, the pastor’s home is an open, revolving door. Congregants can, and will, pop in at any time, at all hours. Those children feel more like they have no space of their own, no privacy, no claim to their parents’ time because there is usually someone over. Either way, it’s a sacrifice for the children, just try to keep in mind what their life is like as a PK.

All that said, we personally teach our kids that it is a joy and honor to serve, and that the benefits far outweigh the sacrifices. Though there are some pitfalls, there are many, many blessings.  They are privileged to see miracles happen before their very eyes. They get to take part in praying for the congregation and watch the Lord answer those prayers. They invest their little hearts into some of those prayer requests and even initiate the prayers often times. They get to tag along with Daddy to ministry events and watch him firsthand ministering and teaching people about Jesus.

It’s a beautiful thing to stand next to my 13-year-old during worship and hear her singing loud and proud, pouring out her heart to the Lord. To watch our six-year-old lift her hands for the first time. To hear our 11-year-old re-tell an account from the Bible. And to listen to our nine-year-old quote the entire 23rd Psalm from heart. There are some perks to being ‘drug’ to church all the time- they are learning and growing even if they don’t realize it.

They are learning what it means to live a life sold out for our Savior, and we wouldn’t want it any other way. Dying to self, it’s the call for every believer, and the sooner they learn that, the better. So while the thought of raising PKs scares me at times, it also excites me, because I trust my Jesus with these babes. He WILL get all the glory due His name and the enemy will not win.

I implore you, if you attend a church where the pastor’s kids are still around, encourage them, love on them, invest into them, pray with them. Let them know they are not expected to be perfect. Give them the freedom to fail, because they will fail regardless… they are human, and when they do, lovingly help them back up and restore them in grace. Encourage their parents with words of kindness, point out the positives. And when an issue does arise that needs to be dealt with, remember how you would want someone to come to you about your kids’ faults or wrongdoings. All things with love and grace.